George Engleheart  (1750-1829) was one of the most prolific
miniaturists of his day. He also kept a detailed fee book, which is
still in the possession of his family descendants.  Although there are
very useful extracts from this fee book to be found in George
Williamson's monograph on Engleheart, published in 1902, there is
nothing like referring to the real thing to glean those extra snippets
of information that make a miniature so much more interesting!  Only a
few artists from the Georgian/Regency period kept details of who they
painted and what fees they charged, and fewer of these precious
historic records survive.  For in those days, there was no fiscal duty
to keep such records, as there was no income tax or tax on savings and
a person's wealth was no business of anyone's, save for the curious
and the fortune-hunting. 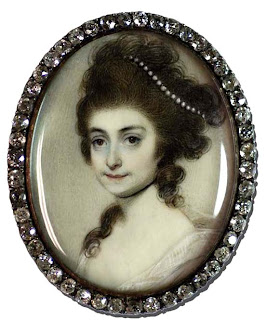 'Miss Banks' by George Engleheart (in the collection)
1775 was Engleheart's first year 'in business'  and his fee book
records that a Miss Banks was painted on 15th February 1775.  Lady
Banks was painted the day before.  The sum of £6 6s (6 guineas) was
charged for the two portraits and Engleheart's bill was settled on
25th March 1775. 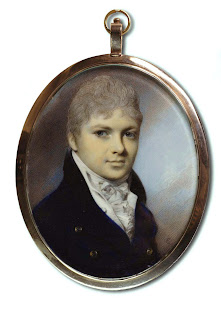 'Captain Flint' by George Engleheart (in the collection)
By 1802, Engleheart's charge for a miniature had risen from £3 3s to
£12 12s, which was still quite a modest sum, as fees for top miniature
painters go.  This is shown in the fee charged to 'Mr. Flint' for a
miniature painted 16th January 1802, and 'copied' on 23rd March 1802.
Flint is recorded as paying the artist for one miniature on 7th April
that year, with the copy being paid for by a Mrs. Seton three months
afterwards 'for Mr. Flint'. One wonders whether the Flints were having
a little financial difficulty.  The artist cannot have been very
pleased, having to wait four months for his money. Later, the same
sitter is referred to as Mr. Geo (George) Flint and also Capt. George
Flint. 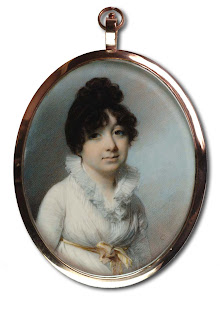 'Mrs. Flint' by George Engleheart (in the collection) 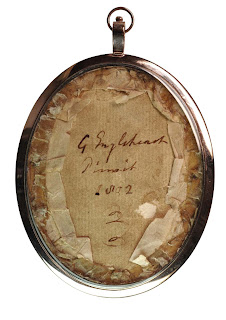 Reverse dated 1802
The artist does not record the date he painted Mrs. Flint, although he
signed it on the front and inscribed it on the back.  This shows that
the records Engleheart kept were not completely comprehensive.
Six years later, the couple were painted again; Mrs. Flint on 2nd
March 1808 and 'Mr. Geo Flint' on 21st March in the same year.
According to the fee book, the charge was still £12 12s each and this
time Flint settled the bill 'promptly' on 30th May 1808.

Although we have not counted the entries in the fee book ourselves,
this figure is generally accepted as being 4,853 over the space of
Engleheart's 39 year career.  This works out as an average of over 2
per week.  Given that it is not completely comprehensive, it is
possible that his true productivity is nearer 3 per week. A truly
astounding achievement.
Posted by portraitminiatureclub at 4:53 AM 5 comments: 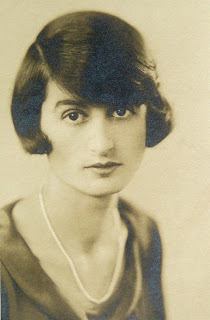 Ada Whiting, who was born in Australia, had a life that bore
extraordinary parallels to the famous Georgian miniature painter, Anne
Mee.  Ada's father,  George Cherry, who was born in England and
emigrated to Tasmania,  was an artist, but he earned his living as a
photographer.  His talent was recognised when he was appointed as one
of the small battery of official photographers following the
Australasian tour of the then Duke of Edinburgh, Prince Alfred, in
1868. 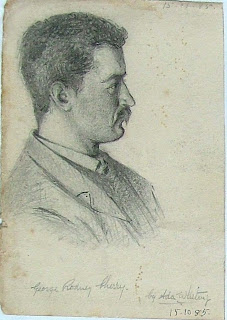 A pencil drawing by Ada of her father drawn in 1885 when she was 26
By the time she was 18, Ada and her four younger siblings were
orphaned, when both their parents died young.  Ada moved her family to
Melbourne, where she found work in a photographers' studio, colouring
photographs.  Largely self taught, she managed to support herself and
her family with this work.  Later she met and married her husband,
Saville Whiting, a photographer.  The marriage was not a success,
despite two children, and Ada left him.  By this time, Saville's
occupation was described as 'Speculator'! 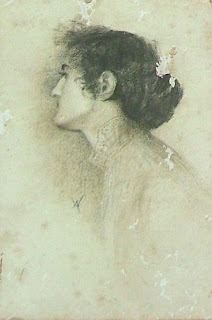 A self-portrait sketch
She painted her first miniature when she was 40 and two years later
exhibited two portraits at the Royal Academy, London. However, she was
not much interested in exhibiting, preferring to get on with earning a
living.   Soon she became noticed and in 1905 the National Art Gallery
of New South Wales bought one of her miniatures for ten guineas. 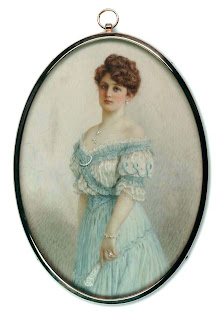 Portrait of an unknown lady painted in 1907
(In the collection)
By this time, she was painting for clients around the world, including
many celebrities such as the most famous diva of her day, Dame Nellie
Melba.  She and Melba became friends and Ada painted many portraits of
her.  Urging her to come to London with her, where she promised to
introduce Ada to London society, the artist never actually left
Australia, much to her friend's dismay.  Modest and stoical, Ada
carried on with her painting, taking what work came her way. Some of
her compatriots were scathing about her Tasmanian roots, dubbing her
'The Convict Artist', a nasty reference to Tasmania's past history as
a penal colony.  In 1935, an Australian newspaper ran one of many
articles about her, praising her superb skills and stating that
miniatures were as popular as ever.  She was a quick worker,
completing a miniature in two or three days, and always from sittings,
unless asked to paint a posthumous portrait.
In her later years, she lived with her son, Saville Junior, who was a
clever engineer. 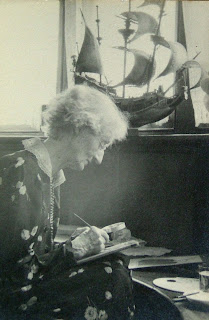 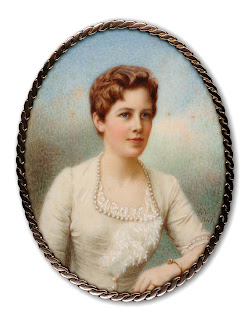 This miniature was painted in 1941 when Ada was 82.
(in the collection)

When miniatures became too difficult to paint because of her eyesight,
she painted flowers.  She was still painting at 91.  Many miniatures
by Ada are scattered around the world, all of them signed on the front
with her conjoined initials 'AW' and sometimes signed in full on the
reverse, also.    We have noticed that her work is sometimes
attributed to a contemporary, Alyn Williams, as they share the same
initials.  However, Williams always signed his name in full on the
front, which makes his work unmistakable.
We are grateful to Ada Whiting's relatives, who kindly gave us further
details about her life and supplied the photographs.
Posted by portraitminiatureclub at 8:28 AM 5 comments:

Out and About Looking for Miniatures

On a recent visit to Bedfordshire we found ourselves looking for miniatures. Preferably a masterpiece! We happened upon two, neither of which was a portrait miniature.
The first, Woburn Abbey, was closed for the winter months. 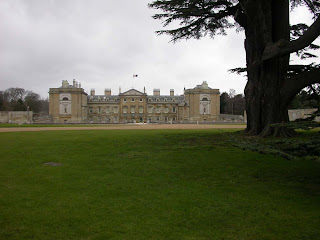 After paying to get into the grounds and Antique Centre, (said to be the best outside of London)
we came across the second masterpiece. 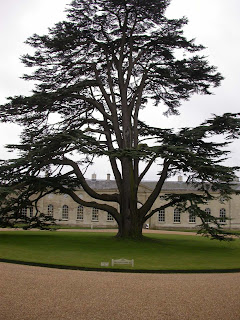 The magnificent  Cedar of  Lebanon just before the entrance to Woburn Antique Centre.
The tree was reputedly planted between 1743 and 1800,
the heyday of the portrait miniature and during the lifetime of such great artists as Richard Cosway and John Smart. 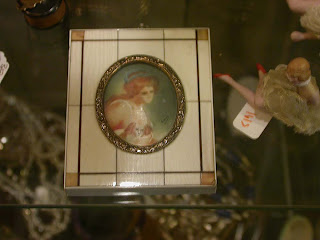 Sadly, the Centre was not a source of rich pickings for miniature lovers. An example above of the classic fake miniature complete with piano key frame and 'signature' , politely referred to as a 'decorative miniature.' 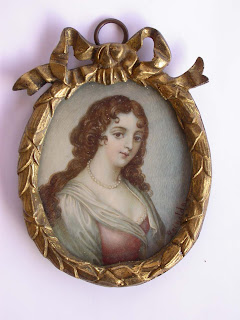 Elsewhere, another example of the 'decorative miniature' with pretty bow top frame 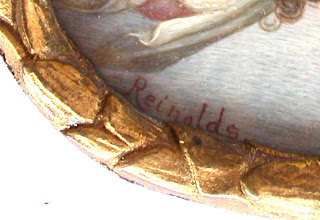 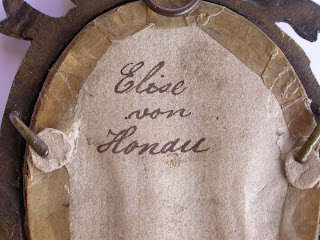 On the back, the sitters name, written in 'olde worlde' writing to add to 'authenticity!' 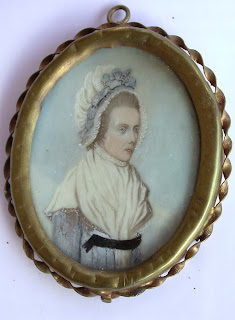 A crudely over painted print in battered frame. 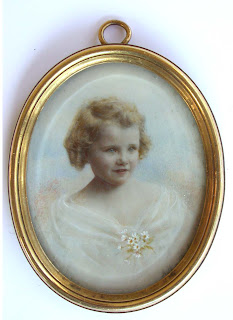 And finally, not a fake but a pretty over painted photograph, (a 'photominiature')
signed and encased in a gold frame.
These were very popular during the late nineteenth and early twentieth century before mass availability of colour photography 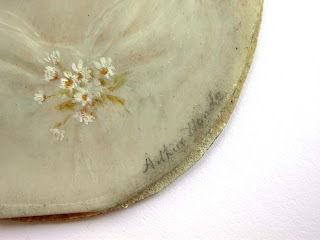 Signature of photographer and artist. Some were more skilled than others. 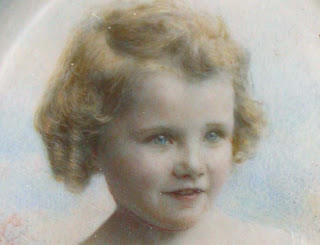 A close up showing the photo underneath.
Happy hunting for that masterpiece!!
Posted by portraitminiatureclub at 6:56 AM No comments: