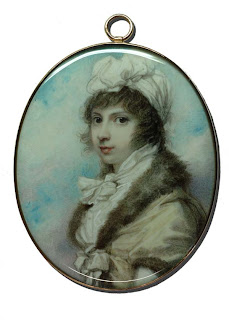 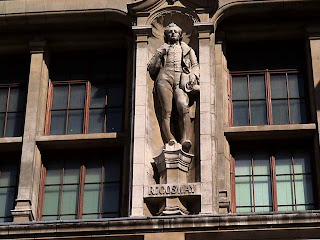 Statue of Richard Cosway outside the Victoria and Albert Museum, London
A competition to extend the V & A Museum was held in 1891 and was won by Aston Webb, who was then awarded the contract to design the present Museum facade. The building work was completed in 1909. The facade included the famous double entrance over which a statue of Prince Albert and a bust of Queen Victoria preside. Amongst the thirty two other statues of great British artists, architects and sculptors which also adorn the front of the building is Richard Cosway (seen above) in pride of place to the left of Prince Albert. He is the only miniature painter to be represented (although he also painted in oils and produced many pencil and watercolour and chalk drawings in his long career). Amongst the other luminaries of the art world are the heavyweights Gainsborough, Hogarth and Reynolds. Cosway's statue was sculpted by Ernest Gillick (1874-1951) who was only twenty seven years old when he was awarded the contract for the statues of Richard Cosway and Joseph Mallord William Turner. Nowadays, Cosway's statue 'companions' are still household names and known worldwide, but the name of Richard Cosway is known only to only a small number of miniature afficionados. 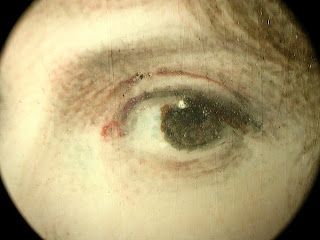 28th May 2010.
Here is another microscope image of an eye painted by an eighteenth century artist for you to consider. Note the 'dabbing' of the blue in the white of the eye and brown dabs around the iris. The vertical lines running down the photo are the sanding marks an artist would made when preparing the ivory for painting. Any natural oils in the ivory would limit the watercolours from spreading on the ivory and sanding was necessary.
To encourage you to make a suggestion as to who you think the artist might be here is a clue.
He stands outside the Victoria and Albert Museum beside the King.
We will post the image of the miniature in a weeks time. 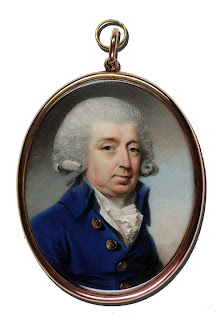 Well Joy, looks like you are the only one prepared to have a try and your suggestion was a good possibility. The eye is from the miniature shown above. George Engleheart 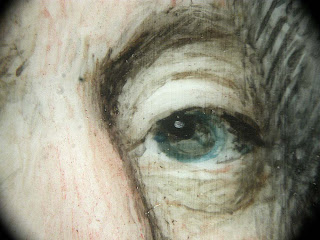 25th March 2010. Here is another eye 'under the microscope'. Please have a go and make a suggestion as to the identity of this 18th Century Miniaturist, bearing in mind what is said below about the Plimer eye. It does not matter whether you are right or wrong. if the miniature is unsigned then your opinion is just as valid as any other opinion. We have been wrong in the past, but we continue to learn all the time, which is the most important thing. This particular artist was well known for painting his sitters with large deep set eyes 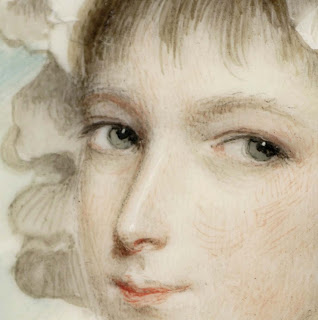 Well done to Joy. Not for identifying the eye as by Andrew Plimer so much,
but for having a go. What we have to remember is that Academics, Auction Houses etc. do not always identify artists correctly and wrong attributions are not uncommon. There are several unsigned miniatures in this collection that have had numerous attributions to different artists given by different Auction houses and Academics down through the miniature's provenance. By becoming familiar with Miniaturist's brush stokes is the way to becoming more confident, a bit like recognising someone's hand writing.

15th March 2010. Good morning friends.
Here is another eye for you to look at. It is by a very famous 18th century artist.
Please have a go and suggest who it could be. The cross hatching gives a clue. 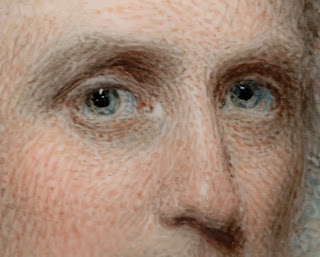 10TH. March 2010. Well, no guesses on the anonymous eye so here is the face. Yes it is William Wood 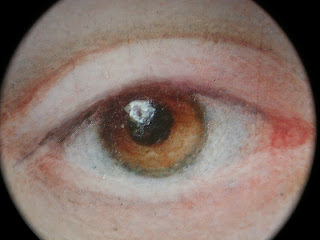 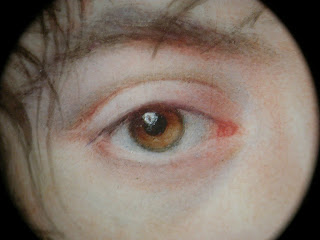 In anticipation of the Augustin Exhibition April-June this year, what
better opportunity than to show an eye from a miniature painted by
this great artist. This photograph was taken using a microscope and
this enables us to see what the artist himself never 'saw' (other than
in his mind's eye). It really brings home to the viewer the artist's
incredible skills, which were mostly 'self taught'. Schidloff reports
that Augustin considered his skills were acquired through 'nature
and meditation.' Please bear in mind that the iris in this image is
0.050" or 1.2mm diameter, the pupil is 0.020" or 0.5mm! diameter.
If any other collectors have miniatures by Augustin that they would
like to share with all of us, please email us an image and we shall be
delighted to post it (anonymously if you wish). Or if you have any
thoughts or comments on the artist's technique, please let us know. 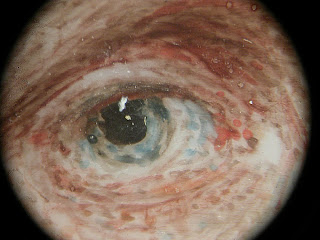 For comparison, here is an image of an eye painted by another well known artist, showing his very distinctive technique. Does anyone recognise this 18th century artist's style? Or why not have a guess? Please comment below.
Posted by portraitminiatureclub at 3:41 AM 1 comment:

There is to be a Monographic Exhibition of works by Jean
Baptiste Jacques Augustin in his home town of Saint Die de Vosges,
France. The exhibition which will be in the Museum Pierre Noel and
runs from 17th April 2010 - 20th June 2010. It is curated by Bernd
Pappe, who has written the exhibition catalogue, which is all in
colour. Saint Die is only a small town and apparently located in very
beautiful countryside and famous for his annual meeting of
Geographers. We shall be going to this exhibition on Friday 25th April
- perhaps see you there? Roger and Carmela, Portrait Miniature Club.
10th March 2010.

Under The Magnifying Glass: Exquisite Miniatures

By Wes and Rachelle Siegrist

This exhibition features 50 of the Siegrists' spectrum of miniature paintings including landscapes, portraits, still lifes, and wildlife drawn from their book Exquisite Miniatures by Wes & Rachelle Siegrist, available at the R.W. Norton Art Gallery, or online at: www.artofwildlife.com/miniature_painting_books.html

The World of Nature in Miniature;

Paintings by Wes and Rachelle Siegrist

Posted by portraitminiatureclub at 11:12 AM No comments:


We are pleased to announce the Portrait Miniature Club has now been formed
(Association Loi No. W241001590) and is open for membership.


To join, members email us with their name and country of residence.
They are given a membership number. Email addresses of members are
not given to other parties unless they consent to it.

However, we shall be happy to mention those offering a service, such
as consultancy, conservation and framing of miniatures on our site,
providing an email address is given for members to contact the person
direct.