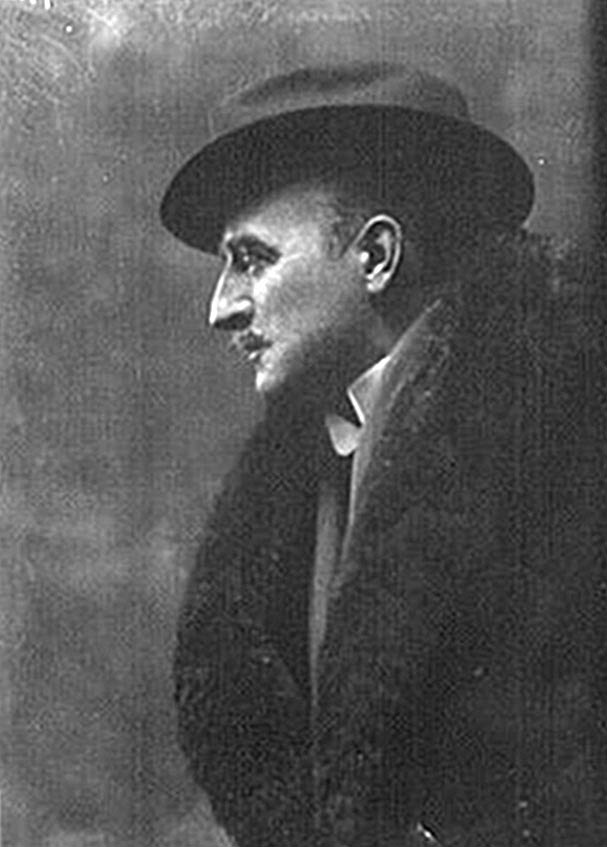 Robert Lee Keeling was born in Baltimore, USA.  His father, Robert James Keeling, was a clergyman.  His mother was Elizabeth Bend Polk (1830-1874) and her son's miniature of her is now in the New York Historical Society Museum.  He had a sister, Rose, who married Stilson Hutchins, the founder of the Washington Post, and the couple became well known in the newspaper Society columns.

By the time he was 16, Keeling's family had moved to Harrisburg, Pennsylvania and the 1880 Census reveals that he was still at school at that time.  In June 1891 the New York Times reported that a sketch performed at the Lyceum Theatre called 'A Lesson in Acting' featured a young Robert Lee Keeling 'hitherto unheard of, was the real thing....'   Although Keeling started his career as a stage actor, by the time he was in his 30's he was a miniature painter of great repute.   It is not known where he trained as an artist.

In  March 1893 the New York Times announced that Keeling was to marry Nannie Key Michell (nee Tyson), a widow some 20 years older than him, previously married to a wealthy auctioneer.

Keeling's reputation as a miniature painter soon took on near legendary status on both sides of the Atlantic.  American newspapers made much of his Royal commissions  to paint Queen Alexandra in 1901, and King Edward VII the following year.  He painted many a famous family in both Europe and America and gossip about his personal life featured in a clutch of newspapers in 1897, when his first wife, Nannie Key Keeling , from whom he was estranged, aged 'in her fifties', was found dead in her home.   Apparently the marriage was unhappy and the couple had soon separated, with Nannie living most of the time in New York and Keeling living in Washington.  Even the New York Times ran the story in its September 19th 1897 edition.

Keeling was a frequent visitor to England and exhibited in the Royal Academy in 1905. He mixed with the cream of society with families like the Vanderbilts and Stuyvesants and his comings and goings were dutifully recorded in the Social Pages - what parties he attended, where he was staying, who he was seeing. 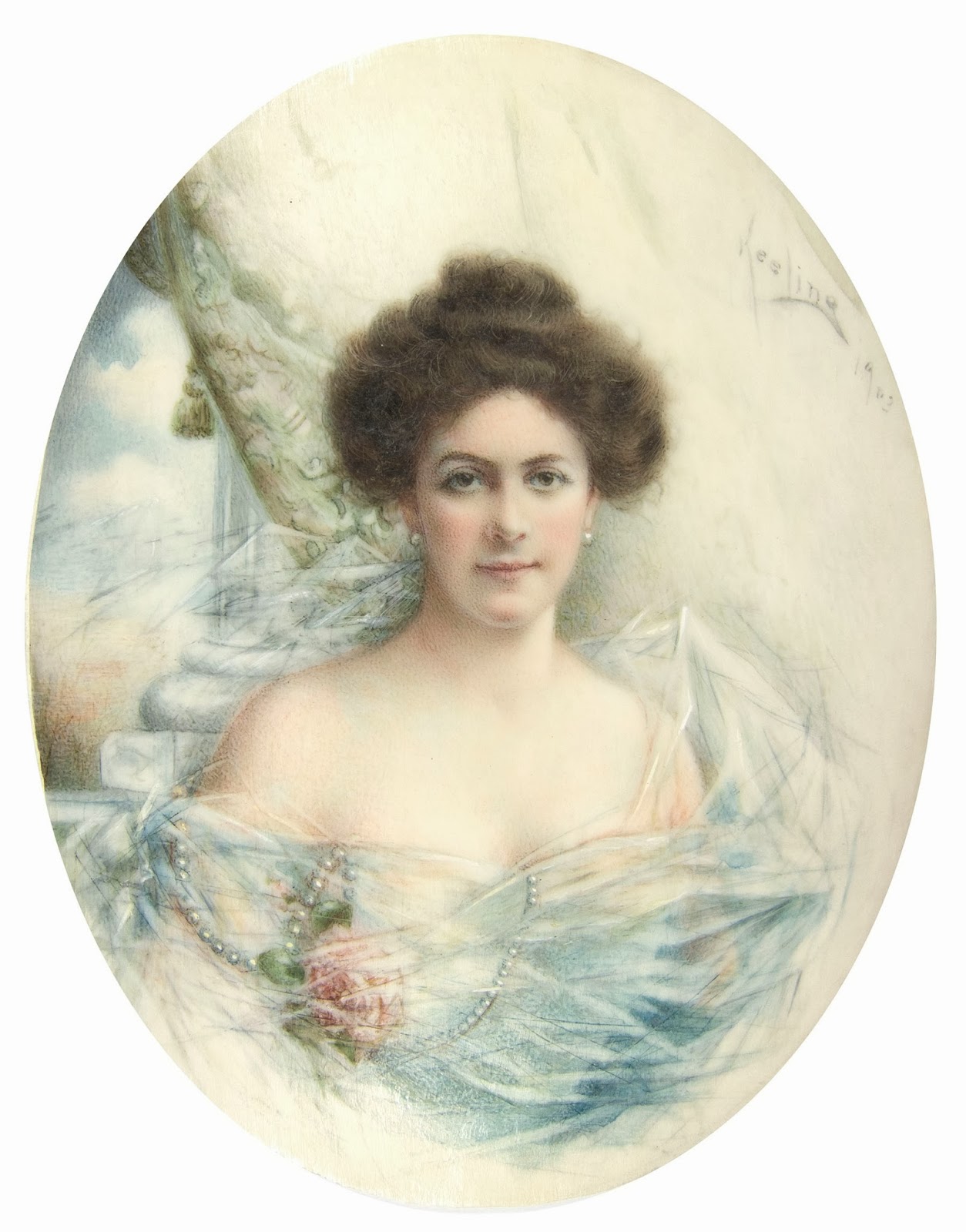 This miniature by him dated 1903 may possibly be his second wife, Caroline.  Originally in a gold frame and kept in its Tiffany leather travel case purchased from Bond Street, London, the suggestion is that it was painted in London.  The romantic and superb setting of the miniature attest to it being a gift of love. 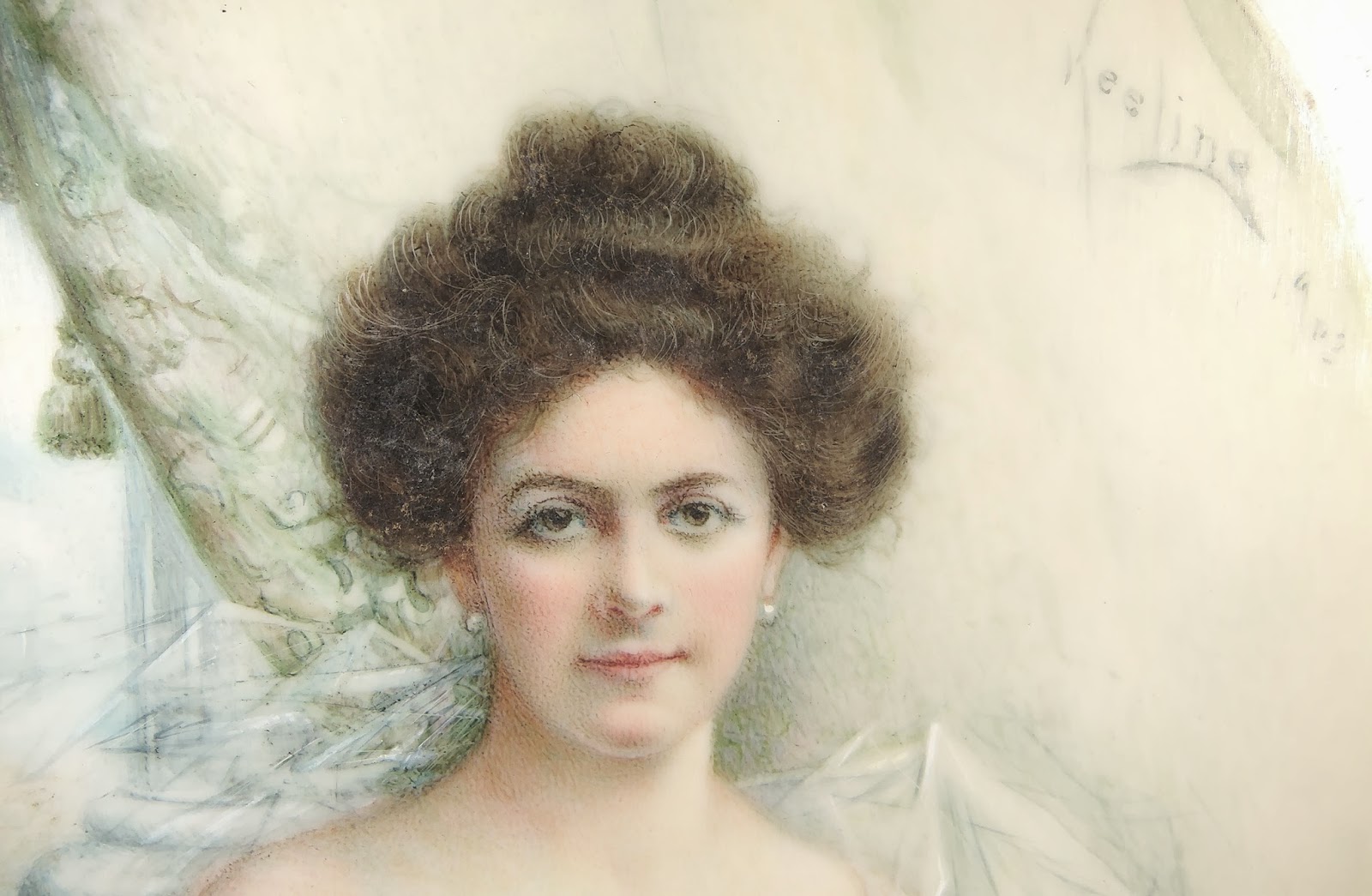 There were still newspaper reports of him living with Caroline Weldon in New York in 1910 but in January 1912, his personal life again became a 'cause celebre' when Caroline divorced him, citing that 'he had failed to provide her with the necessaries of life for the past year... and had deserted her'. Much was made of the fact that she was a great beauty.  Having been granted the divorce, tongues wagged again when she remarried with indecent haste.... to her lawyer. 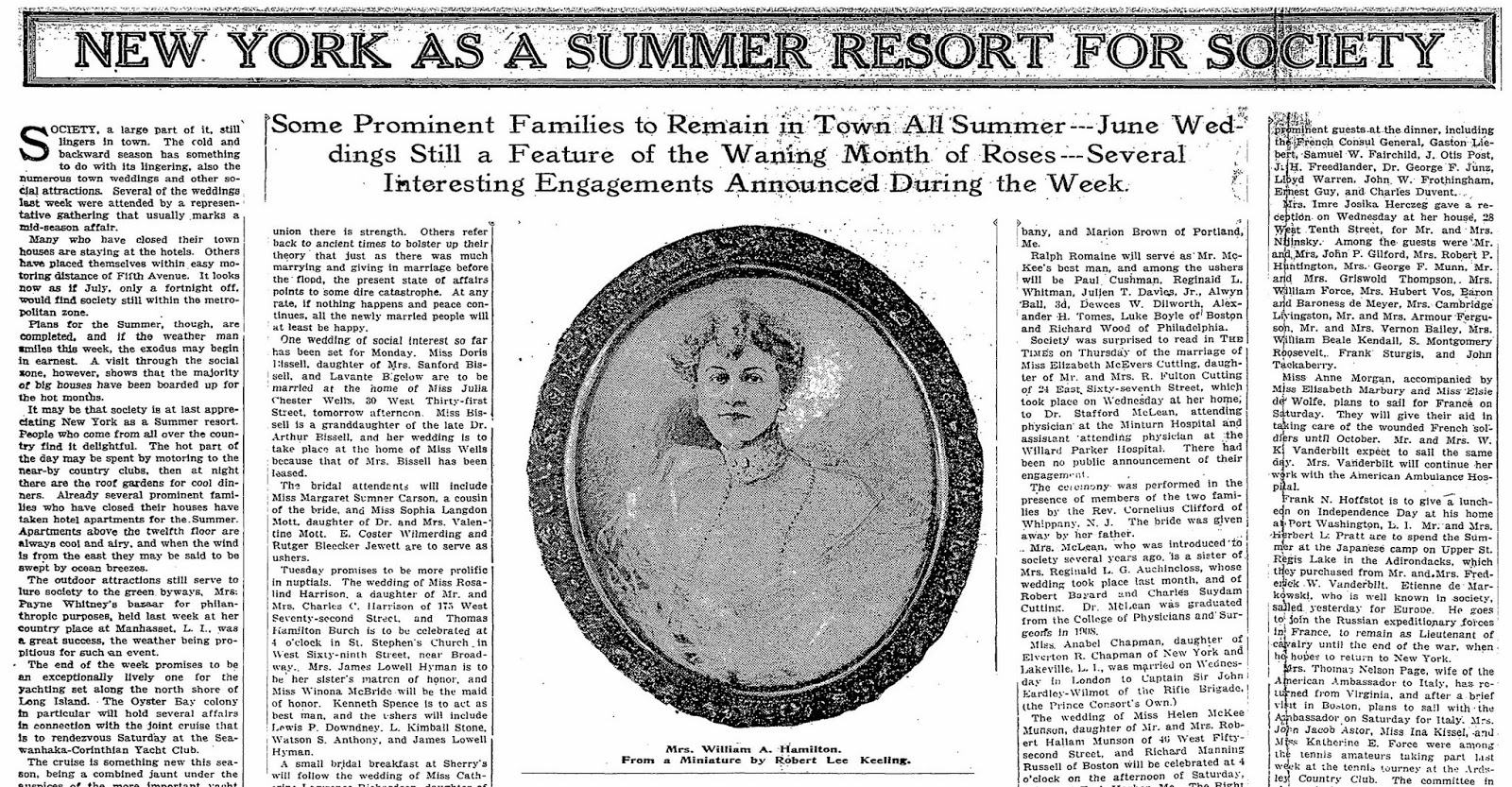 New York Times June 18th 1916 showing an image of a miniature by Keeling of Mrs. William A. Hamilton

The dodgy reputation did not appear to harm his career or his  ' invitability' and Keeling was still regularly appearing in the newspaper Social Columns, often accompanied by his married sister, Rose.  His frequent trips to Europe continued with a report in the New York Times October 7th 1922 announcing his recent return and giving his address as 135 East Thirty Fourth Street, New York, an address used by him for some years.

Keeling miniatures are rare.  He signed his work 'Keeling' with a flashy flourish.  Please let us know if you have one of these miniatures as we would love to see more of his work.

Posted by portraitminiatureclub at 11:36 AM 4 comments:

Although born in Tasmania, Ada Whiting's work appears to turn up just as frequently in England and America as in Australasia.  During her career as a photographic colourist and later as a miniature painter, Ada painted many of the foremost families of her time, both Australian and visiting British and American dignitaries from her Collins Street, Melbourne studio.

Two charming portraits of the same sitter, Margaret 'Peggy' Woolrabe (1876-1909) recently came up for auction around the same time; one in Australia and one in England. Peggy Woolrabe, nee Leask, was born in Scotland and married Frederick William Woolrabe in 1902, an Edinburgh-trained doctor ten years her senior.  Peggy died tragically young and the two miniatures, one a head and shoulders and the other a three quarter portrait, were probably both painted after her death. 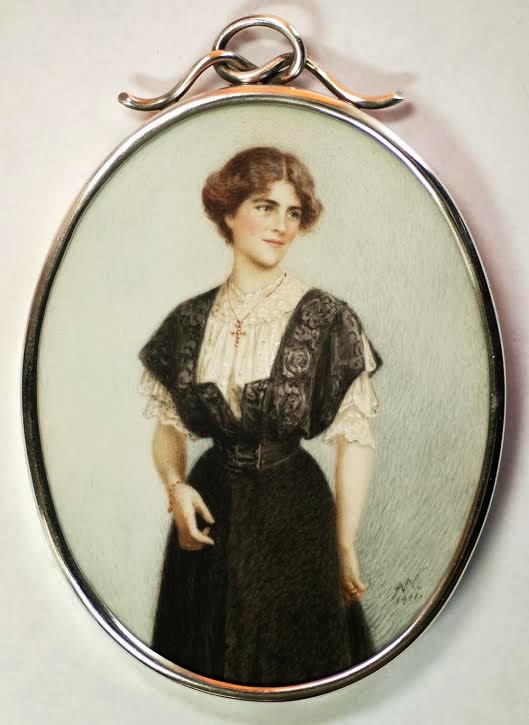 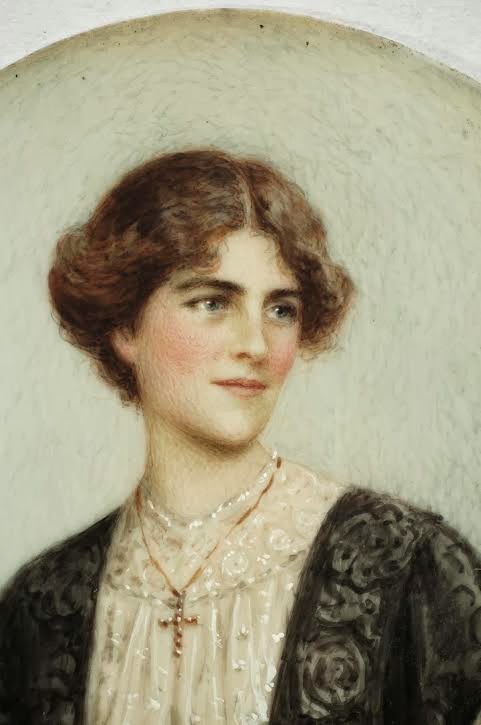 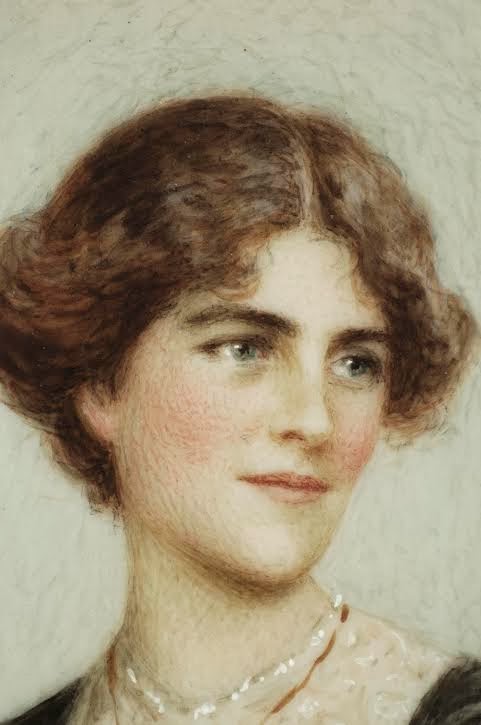 Ada Whiting usually signed her work in monogram, but it is often overlooked. 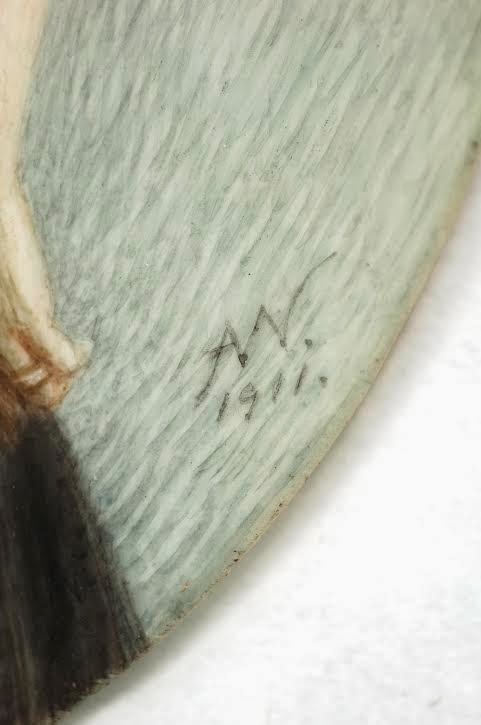 Several members of the prominent Ross-Soden family were painted by Ada Whiting around 1906. The miniatures of two charming daughters of Isabel Ross-Soden went out of the family and appeared in an Australian auction at Charles Leski on 30th March 2005.  Lots 84 and 85 at estimates of Aus. $300-400 and Aus.$400-600 failed to find buyers, despite looking so charming. 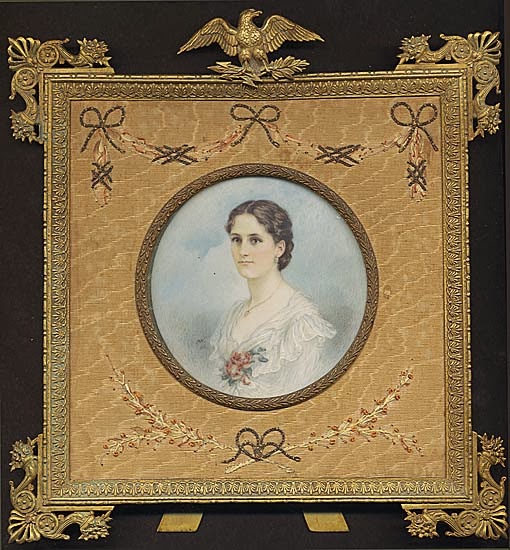 Their mother's portrait, too, Lot 82 and described as 'oil on card' was passed in.  The descendants of this family would love to know what happened to these miniatures.

Posted by portraitminiatureclub at 3:43 AM No comments: