JOHN W. NAISH (1771-1852)
Born in Axbridge, Somerset, like his brother, William, he entered the
Royal Academy School on a six year course. The Royal Academy records
show that he entered the school on 18th February, 1791, aged 20 . It
is not known whether he completed the course.  He exhibited miniatures
at the Royal Academy from 1790-1795. He is also known to have painted
sporting subjects.  Apparently, a picture of a spaniel, signed and dated by him on
the back (what looks like 1791?) was sold at Sothebys on 21st November
1979 (Lot 23).
During his time in London, his known addresses are: 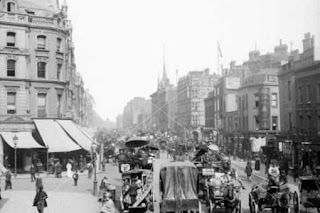 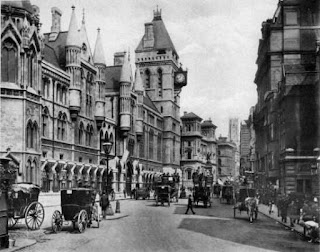 The Strand in Victorian times

Like his brother, William, very few signed examples of his miniatures
appear to exist.  One, ostensibly signed on the back, is in the Dumas
Egerton Collection, now on long term loan at the Scottish National
Portrait gallery.  Sadly, we have no good image of this miniature and
to date have been unable to obtain one.

By 1797, he is believed to have lived in Bristol at 27 College Green,
an address given on the back of a a miniature painted in that year.  A
few years later, c.1803, he painted the pair of miniatures below
whilst at 43 Princes Street, Bristol.  This address appears on his
trade card tucked into the back of the miniatures. 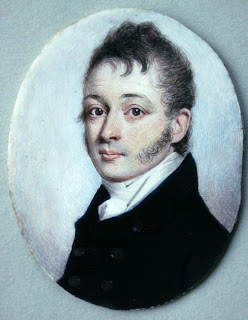 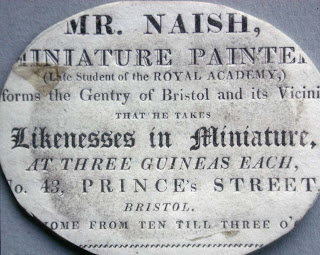 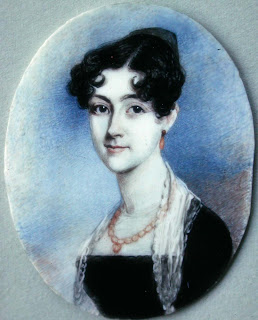 A pair of portraits c.1805 by John Naish when he was in Bristol.
Trade card on the reverse.  Copyright of the Victoria and Albert
Museum, London.

Although the trade card does not mention the
christian name of the artist we know that his brother, William, died in 1800 and so strong
circumstantial evidence dictates that it is John.  It cannot be anyone
else as the trade card states that the artist is late of the Royal
Academy and records show that only William and John Naish attended the
Royal Academy school and exhibited there. Daphne Foskett states in her Dictionary and Guide that William Naish lived for a time in Bristol, but there is no evidence to support this and it is extremely unlikely to be so.  For one thing,  William  had a large and successful London practice, he is placed firmly at London addresses for all his adult life by his exhibits at the Royal Academy and he is always described as being a London resident by contemporaries. 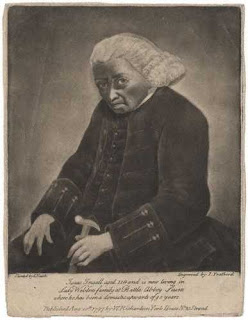 There are several known engravings after John Naish.  An engraving dated 1797
by John Yeartherd, after John Naish, of Isaac Ingall (1678 - 1798), a
strange looking portrait.  The sitter was famous for reputedly living
until 120!  He worked for the Webster Family at Battle Abbey, Sussex
for 90 years.
In 1805, The Gentleman's Magazine states that John Naish '...resides
in or near London' and was patronised by and a friend of the late Sir
Joshua Reynolds, under whom he studied portraiture.

In some reference books, it is stated that John Naish lived with his
brother, William, at one time, but there is no evidence to support
this, despite the fact that they both lived at the same address, but
at different times.  262 Stand, London was occupied by William Naish
between 1786-91 and by John Naish during 1792/93 according to Royal
Academy records.

The 1851 Census records John Naish as being married and still
practising as an artist, aged 80.  By this time, he had returned to
his home county of Somerset and was living as a lodger at 72 Silver
Street.  The head of the household was a Mr. Durban, an agricultural
worker and his wife, a laundress.  John Naish is recorded as having
died in 1852.


If anyone has a miniature or other painting by John Naish, or any further information, we would love to hear from you.


Posted by portraitminiatureclub at 4:21 AM