Three brothers, all miniature painters, is not unique in 'miniature'
history. After all, there are the Naish brothers and the Theweneti
brothers to name two other trios who worked in the 'West Country' in
England during the late 18th and 19th century.  However, unlike their
counterparts, the Daniel brothers did not sign their work, nor leave
helpful trade cards as an aid to identification. 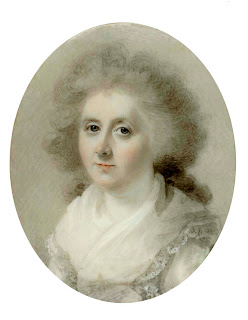 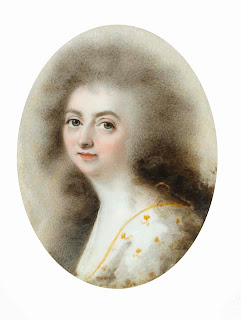 Two Miniatures by Daniel.
The three Daniel brothers, Abraham, Joseph and Phineas, were the sons
of Nechaniah Daniel of Bridwater, Somerset and were considered to be
the earliest known jewish artists in the area.  It has come to be
accepted wisdom that all three were taught the art of miniature
painting by their clever mother.
Phineas, the least heard of, worked mainly in Bristol, Abraham
(c.1750-1806) worked mainly in Plymouth and Joseph (c.1760-1803)
worked mainly in Bath and is generally referred to when one talks of
'Daniel of Bath'.  There appears to have been a keen rivalry between
the brothers, all of whom referred to themselves as 'Mr. Daniel' (or
Daniell).
To compound the confusion, all three brothers had business in Bath and
Exeter at various times.
So which was which?
Looking through past records of sales of Daniel
miniatures in the major London auction houses over the years, almost
all of them appear to be attributed to Abraham.  Abraham is the only
brother for whom a signed miniature has been found (depicting Rabbi
Moses of Plymouth), although to our knowledge there is no illustration
available and the whereabouts of this miniature is unknown.  No other
signed examples have come to light.
According to the opinion of Graham Reynolds, as reported by A. Reubens
in his book 'The Daniel Family', Abraham's work has a broad band of
light on the bridge of the sitter's nose, not much in the way of
background, no detail in the hair and sharp edges on the nostrils and
lips. Abraham, who was an engraver and jeweller as well as miniature
painter, left an Estate of £1,500, with £50 apiece left to his
mistress and his illegitimate children!
Joseph Daniel was apparently considered to be the better artist in his
day, and he did not marry Mary Wright until 1798, only a few years
before he died aged 43.  But long enough to father four legitimate
children. There were also tales of illegitimate children in Bristol.
His work is said to have more detail in the hair, more heavily painted
backgrounds, greyish shading on the face, and use of opaque white on
the costume of his sitters.
Looking at the two miniatures above and the enlargements of the faces below,
they would appear to be by the same artist.
Note the same treatment of the eyes and the upper eyelash line,
a rectangular shape of the nostril shading and the 'dotting' along the mouth line 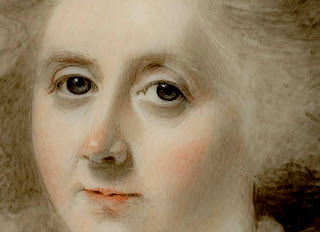 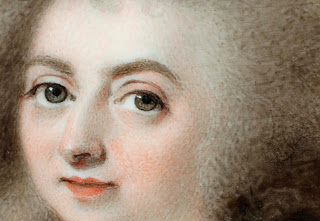 If one looks closely at enlargements of Daniel miniatures in
past auctions, one can pick out some differences, including some of
those mentioned above.   But as to which brother is which, that is
another story! 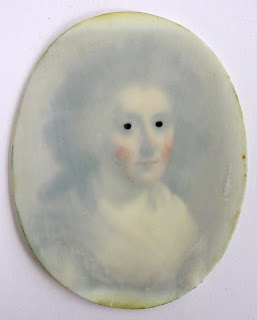 When we opened the first miniature

we discovered that Daniel used a 'trick'of the trade'
and had painted two small black dots on the back of the ivory
to make the eyes look darker on the painting.
He also added a little 'rouge' to give an extra red glow to the cheeks.
Interestingly, the second miniature did not have this extra treatment
so it would appear the artist only applied this trick
if he wasn't satisfied with the finished painting.

Posted by portraitminiatureclub at 8:57 AM