Like many miniature painters of that time, the artist usually used genderless initials to sign her work, F. E. Howell.  She did not use her first Christian name but referred to herself as 'Ethel' Howell rather than Florence Ethel Howell. 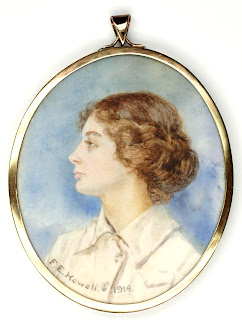 Miniature of her sister, Mrs. Margery Henderson, which was exhibited at the Royal Academy in 1914 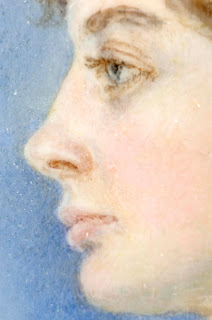 From this image of her sister, we can get an idea of what the artist might have looked like.  Pale complexion, light brown hair and strong, handsome features.  The artist often favoured the profile or almost profile pose and succeeds in making it an arresting and interesting portrait 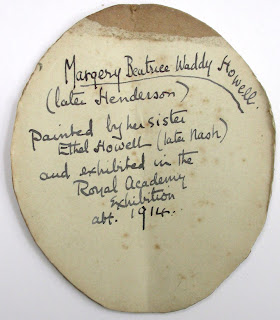 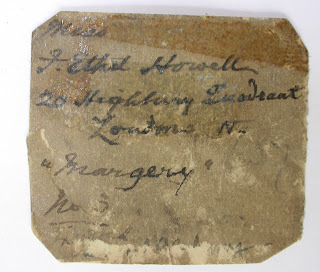 Using our Dictionary of Miniature Painters 1870-1970, we can see that this artist exhibited between 1913-1935 at the Royal Academy and the Royal Miniature Society.  Her father was a Cane Stick Manufacturer and the family lived at 20 Highbury Quadrant, Islington.  She lived with her family until she married  Leonard Montague Nash, a Greengrocer, in 1919.  This information shows that the label above, detailing her married name as 'Nash' was added later. 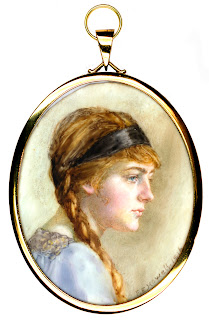 A haunting miniature by the same artist of 'Marguerite', signed and dated 1916, possibly also a member of her family, judging by the strong features and distinctive colouring 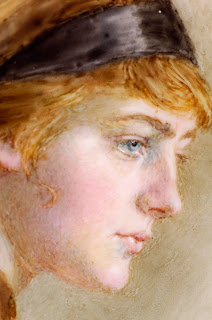 Close up showing the difficult 'almost' profile pose.  Like the other miniature, this had to undergo conservation work to separate the ivory from the backing sheet to which it was stuck, causing the ivory to 'buckle'.  Unless released, the ivory would eventually crack. Standards of Conservation work were in their infancy 100 years (or even 50 years ago) and it was mistakenly thought that by sticking the ivory portrait to a cardboard backing sheet, it would be 'supported' and prevent curvature and cracking.  Sadly, this very practice has been responsible for many bowed and cracked miniatures. 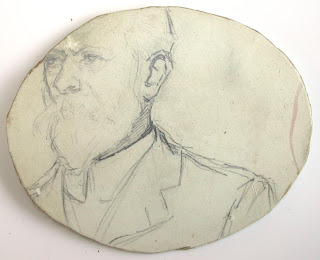 An unattached cardboard backing sheet showing a pencil sketch of an elderly man, possibly a preparatory sketch for another miniature. 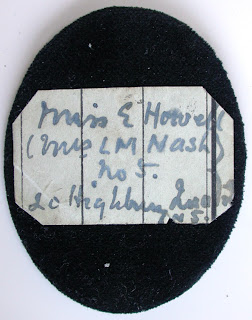 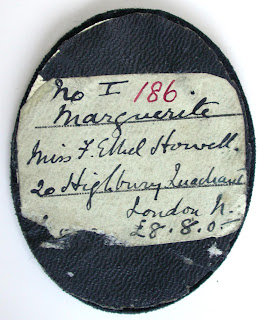 The original Exhibition Label showing the price of 8 guineas asked for this miniature.  This price was a little below the 'top' price of 10 guineas that was usually asked for a head and shoulders portrait.  Using the average wage today and then to make a rough financial comparison, this price would be the equivalent of about £1500 today.
Posted by portraitminiatureclub at 2:32 PM