A visit to Saint Die-Des-Vosges 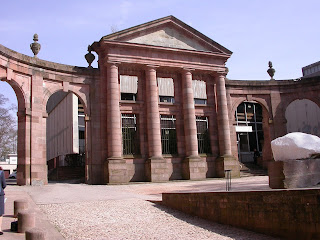 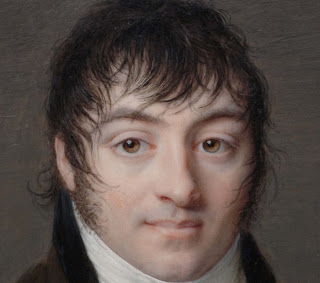 Claude Derville Malechard, signed and dated 1801 by Jean-Baptiste Augustin (1759- 1832) from our collection

If we had to choose a miniaturist who stands above all others then Augustin would have to be high if not first on the list, so to visit his home town and see an Exhibition celebrating the 250 year anniversary of his birth was very exciting for us.

We were surprised to find that the town had been almost completely re-built after the war and does not give an impression of what it might have been like during Augustin’s day. One imagines it was a small sleepy backwater with tiny houses and cobbled streets. Seeing the dramatic backdrop of densely forested hills, as seen from the position of where his family house once stood, it is possible to see why he said that he got his inspiration from meditation and nature.

A lovely catalogue has been produced for the Exhibition, albeit in French, which was good practise for us!

Several miniatures in the Exhibition were lent by The Louvre Museum, Paris and The Tansey Foundation. (

The story of Augustin's life was told using panels around the room with the exhibits in glass top desk- like cases in the centre. Some magnifying glasses were helpfully supplied on each case, fastened with a short lead, as a reminder to the user not to take it away! Unfortunately we were not allowed to take any photographs inside the Exhibition room.

Augustin came from a modest family, his grandfather being a baker and his father a glass worker. His huge talent made him very successful after his move to he met and married his true love Pauline Du Cruet, 22 years his junior, who came from high society and elevated his social status. During his career, his thriving studio had over four hundred pupils, eager to learn his painting techniques. His wife, also a miniaturist, was one of his most accomplished pupils. The couple were obviously a love-match, but had no children. Augustin's ' rags to riches 'story is the stuff of Hollywood movies!

One intriguing exhibit was the preparatory drawings for his masterpiece of Marie-Therese Charlotte, the Duchess d’Angouleme. From these drawings, Augustin painted a large miniature about ten inches high, on ivory. Two copies of this painting are known to be in existence, one dated 1818 and another 1824. They represent Augustin at the height of his powers. The detail is extraordinary with his usual superb flesh tones. We show here details of the diamond tiara showing the different reflective colours in the stones, the lightness of the feather headdress and of course his wonderful technique for eyes. 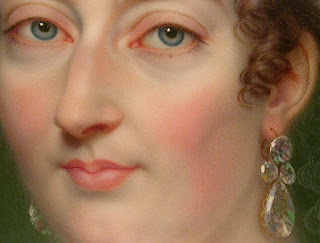 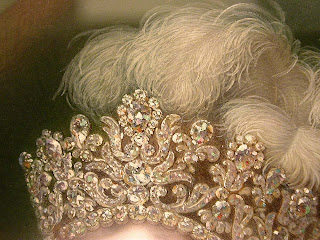 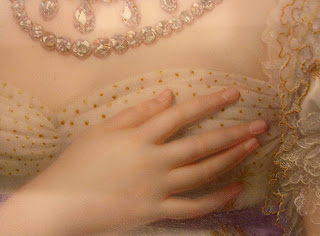 Detail of hand on breast 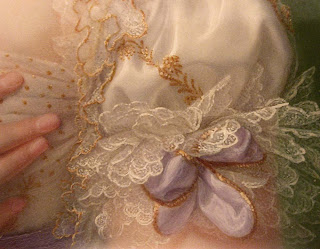 Posted by portraitminiatureclub at 5:14 AM