The image of this miniature by Ethol Court c.1955 of Master Stephen G. F. Aubury is reproduced by kind permission of the owner.
The background colours and style of the two miniatures by this artist are very similar, but clearly she has taken more care over her portrayal of this adorable looking little boy.
We are indebted to Mr. Aubury for allowing us to use this miniature to demonstrate the superb skills of Ethol Court. If anyone else has a miniature by this artist we would like to hear from you. 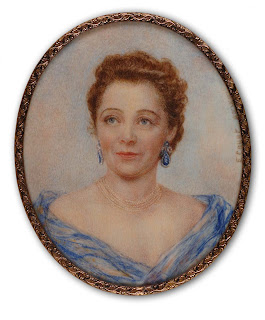 This Miniature by Ethol Court of Mrs. Galburge 1956 is in the collection


Mrs. Ethol Court (1898-1965) became well known as a miniature painter in the area where she lived.  Originally from Preston, Lancashire, her family relocated to Ealing, where she met and married her husband, George.  She started painting in her early 20's.  In October 1956, her local newspaper ran an article about her, mentioning that she exhibited at the Royal Academy, London, the Royal Miniature Society and the Paris Salon.  At the time, she ran an art club from her home at 67 Tentelow Lane, Norwood Green and members attended classes on Saturday afternoons.  It is thought that the following year, the classes were held in Norwood Hall.  Perhaps you posed for her club members, attended one of her classes or even commissioned one of her distinctive miniatures?  If so, we would love to hear from you.


Ethol was one of five children.
Her father was a foreman fitter.  Her husband, George,
was originally from Kent, where his father was a Builders Clerk and
then a Boarding House Keeper and his family too relocated to the
Ealing area.   Before the first world war, George was a photographer
for Percy Peacock, who had photographic shops in New Bond Street,
London and Folkestone, Kent.  During the war, he served in the Royal Engineers. It is not known where Ethol trained as an artist, but after more than 30 years of painting miniatures,  surprisingly, she felt that her work was not good enough!  She
only started exhibiting her work in 1953 and over the next decade or so, right up until the year she died.  A member of the West Middlesex Art Club, she taught others how to paint miniatures.
Amongst some of her sitters in the 1950's were Allan
Holt, Mrs. Galburge, Gillian Caroll and Mr. J. E. Sobee.  We are
always interested in hearing from anyone who knew Ethol Court or who
was painted by her. 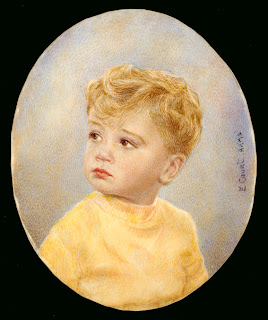 A young member of the Newman Family painted by Ethol Court. Apparently painted from a professional photograph taken by Marcus Taylor of Southall. This miniature was exhibited in the Royal Academy. 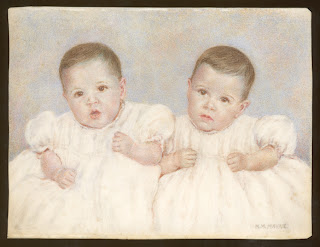 An amazingly accomplished miniature of the Newman's twin daughters, painted by their grandmother, who was a pupil of Ethol Court.  It is possibly an overpainted photograph, but the resolution is not sufficient to see for sure.  However, it still shows an incredible talent.  Note the background colours and techniques, which echo that of Ethol's.


We are indebted to the Newman Family, who were kind enough to send us these images and give their permission for them to be reproduced here.


Posted by portraitminiatureclub at 8:34 AM