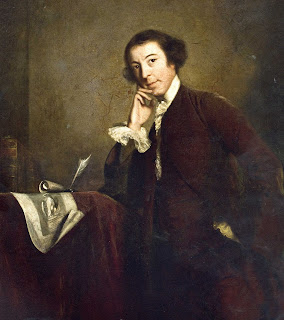 Horace Walpole (1717-1797) as the 4th son of the 18th Century British
Prime Minister Sir Robert Walpole, might have lived an inconspicuous
life if it weren't for his interest in collecting and writing, and his
astonishing transformation of a little villa in Twickenham!
Twickenham, about ten miles from Central London, was a two hour coach
ride from the capital in Walpole's day. Nowadays, it is a journey by
public transport of about an hour, by train, tube and/or bus and the
possession of an Oyster card. 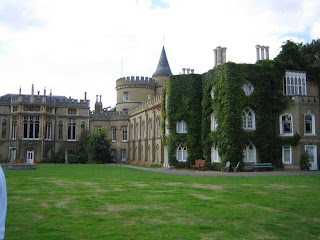 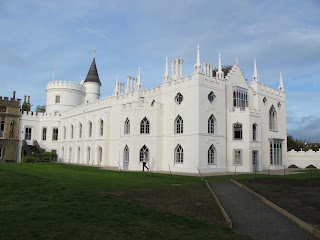 2010 Strawberry Hill after £9million restoration
Purchased in 1748, Horace Walpole spent
almost fifty years and £20,720 on its recreation as a 'little Gothic
Castle' into which he packed paintings, objects, books, curiosities
and sightseers and was credited with starting a Gothic Revival.  In
those days, the house was surrounded by fields and Walpole purchased
further land to augment the original five acre grounds to 46 acres.
From the top floor, there were views over the River Thames.  Nowadays
the views are interrupted by suburban housing. The walls of the
grounds abut the pavement and road in surprisingly close proximity,
and it is now hard to believe that the once magnificent villa was a
teachers training college in the 1920's before falling into almost
complete disarray.  A common problem with men who remain bachelors and
who have no offspring to carry on the 'tradition', on Walpole's death,
Strawberry Hill was left to a friend's daughter, Mrs. Anne Damer, and
was eventually inherited by the Waldegrave Family.  In 1842, the 7th
Earl Waldegrave auctioned off the contents of the house and Walpole's
legacy was scattered far and wide.  Walpole apparently relished his
position as an important collector and connoisseur and encouraged
visitors, although he made it clear that children were not welcome!!
Credited with being the first English collector to recognise the importance of the portrait miniature, he considered his collection of miniatures to be 'the largest and
finest in any country'!  We might be forgiven for thinking that he was
perhaps a little naive and presumptuous, when we consider the large
and fine miniature collections in many of the stately homes as
compared to Walpole's collection, which apparently numbered around
130!!  Walpole had a special miniature cabinet, measuring about 152 x
91 x 21 cm ( 60" x 37" x 8") made of rose wood and with ivory
ornamentation.  This cabinet is now in the Victoria and Albert Museum,
London. 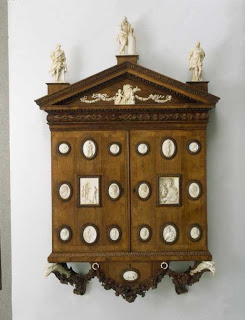 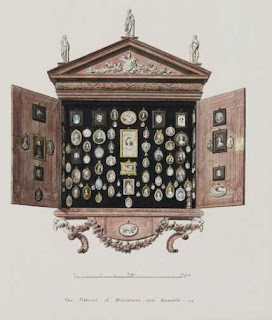 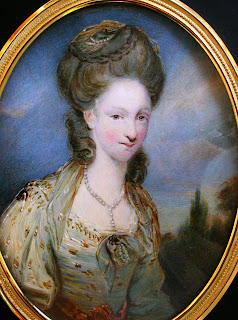 Portrait miniature by William Grimaldi of Lady Hester Stanhope (After Joshua Renolds) c.1795
This miniature purchased with a label stating it was from the 'Strawberry Hill Collection'
was once in our collection
The Lewis Walpole Library at Yale University has
painstakingly attempted to track down all known former possessions in
Strawberry Hill, and their work to date can be seen online at
www.library.yale.edu/walpole.org.  The Victoria and Albert Museum held
a Strawberry Hill Exhibition earlier in 2010, and if you still have
the catalogue from that exhibition, you may like to keep it safely in
order to take advantage of the 'Two for One' offer for entry to
Strawberry Hill printed on the penultimate page.  This reduction may
help to assuage any feelings of disappointment that the refurbishment
of the house is still not completed (at the time of writing) and there
is no furniture or furnishings or gardens, and one is left to wander
around wearing plastic overshoes and a dodgy audio headset in timed
visits 20 minutes apart.  If you do not expect a mansion (the house is
quite small) but love gilding, stained glass, fantastical ceilings and a crazy
layout, the fabulous enthusiasm of the staff and the delightful
homemade fare available from the cafe will delight you. 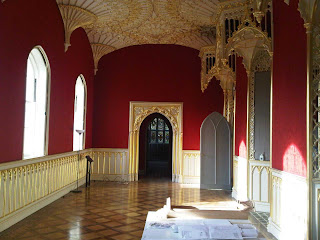 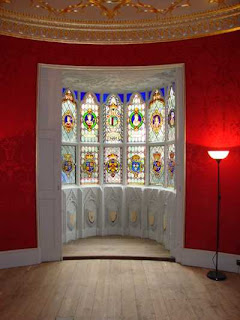 Hopefully, at some time in the future, Horace Walpole's Collections will be reunited
with his beloved Strawberry Hill and we shall be able to see what
visitors to his 18th Century house saw, that made him famous as a
connoisseur.  Nowadays, interest and connoisseurship in British Art is
promoted by the aptly named (but independent) 'Walpole Society'
(www.walpolesociety.org.uk), named after Horace Walpole, which
publishes a specialist volume each year in return for a modest
subscription.
Posted by portraitminiatureclub at 10:09 AM