Where possible we always open up the frame holding a miniature.  It is particularly exciting
if the frame is original and has never appeared to have been opened before.
We do this for several reasons.
There is always the possibility that there might be information about the miniature inside, such as the identity of the sitter or perhaps a signature or note by the artist. Over the years we have made many exciting discoveries which have added to the historical value and interest of the miniatures. We refer to the occasions when we make a discovery as a 'bingo' moment. Apart from signatures or sitter's names we have found instructions from the artist to the framer and even  a record of the hours worked on the miniature and the price. Of course these 'bingo' moments don't happen every time and sometimes,  there is no further information inside.
Another reason we like to open up a miniature frame is that it allows us to clean the various parts such as the glass underside (which on a miniature several hundred years old can be very dirty) and re polish the frame. The cleaning of the actual miniature surface, other than a light dusting with a very soft brush, should certainly be done by a conservator unless you have knowledge and experience in cleaning watercolour paintings.


We have also found that some artists glued the ivory onto the backing support card with a strong glue which has resulted over many years in the ivory becoming 'bowed' and maybe even cracked. This is due to the differing expansion and the contraction rates of two dissimilar materials bonded together. A conservator is able to remove the backing board to release the ivory and allow it to return to it's original flatness.


Finally, removing the miniature from it's frame  allows detailed photography, without the glass diminishing the quality of the photograph. 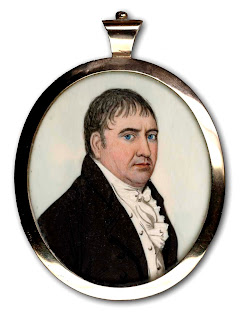 
This miniature was included with another in a lot we purchased at auction. We are not fans of Frederick Buck's work but he is a well known  artist.


Born in Ireland around 1771, Frederick and his older brother, Adam, both became miniature painters. Frederick lived and worked in Cork and with soldiers leaving port to go to war he had a steady stream of clients wanting to leave their likeness with their loved ones or to take a miniature of their loved one with them. He had a production line of ivory blanks with various regiment uniforms already painted, waiting for the head of the sitter to be added, not always perfectly aligned!  His naive painting method is very recognizable and in fact is quite popular with collectors, especially his miniatures of red coated soldiers.


In the above example , the gold frame was badly damaged. 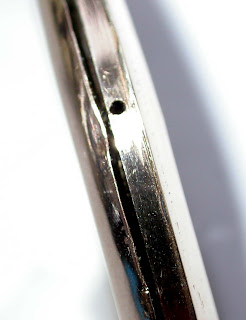 The edge of the frame was badly bent in various places where someone had tried unsuccessfully to prise the frame open. 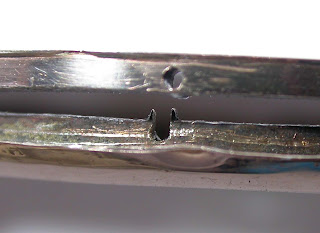 Here brute force had broken one of the connecting pins through the frame.


Frames are made in many different ways. A lot of the eighteenth and nineteenth century miniature frames were manufactured in two halves and kept together with brass pins around the edge. The pins in late nineteenth and early twentieth century frames are usually easy to extract because the pins have heads, but many frames have tapered pins around the edge and these are ground flush, such as with this miniature. It is impossible to open such a frame without removing the pins either by pushing them through the connecting frames or drilling them out.


After removing the pins the frame was opened for the first time in two hundred years. 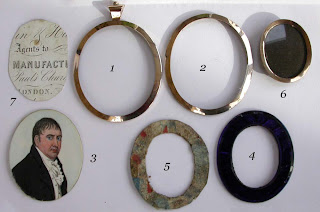 Here we show the various components of the frame disassembled
1 and 2 - Front and Back frame
3 - The miniature on ivory
4 - Blue Bristol glass adornment for rear of frame.
5 - Backing pad for Bristol glass made from an old hand painted playing card.
6 - Centre compartment for rear of frame usually used for holding a lock of hair of the sitter.
7 - Backing support for the ivory made from an old trade card. 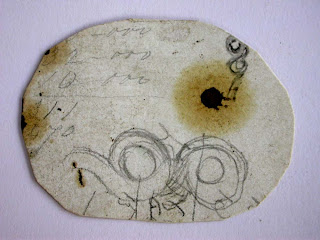 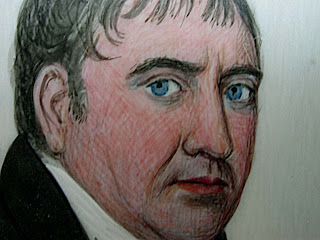 A close up  under special light shows the quick coarse brushwork.
Perhaps more caricature than other artists' work, Buck used a uniform pale grey/blue wash for the background and always a short, sharp line at the tip of the nose. 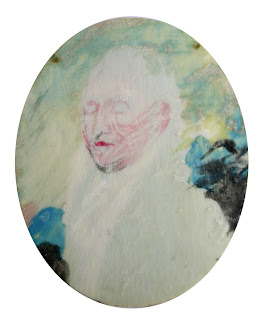 Having taken the miniature apart and photographed its components, we noted that the miniature itself was a little bowed.  We decided that the backing card had to come off,  as this would probably have caused it to warp.  This revealed an unexpected discovery! On the reverse of the ivory, Buck had made some bold embellishments, to an extent that we have never encountered before.  This is a little trick that some artists used to accentuate the colours of the miniature as the translucence of the ivory allows the reverse painting to show through. Clearly, the fact that the backing card was stuck to the ivory, demonstrates that Buck had thought his 'little secret' was safe!  If anyone else has a miniature by Buck with similar hidden 'attributes', we would love to hear from you.
Having now got to know him intimately, we have come to accept this frowning gentleman with startling blue eyes,  and decided to keep him as an example showing the typical work of a well known journeyman miniaturist.
Frederick Buck c.1771-1840
Posted by portraitminiatureclub at 8:36 AM