Since we first wrote about William Naish and William Thicke and the
similarities in their work, we have had the opportunity to thoroughly
examine a number of miniatures by William Naish, and to do some
research into William Naish' s life.   The breakthrough came when we
acquired a miniature with a Naish trade card on the reverse, an
earlier example than the one we already had. 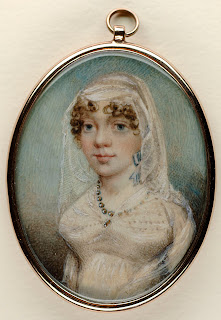 An early miniature by William Naish, probably painted when he was in his late teens 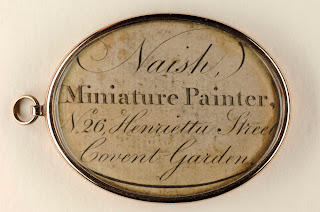 With his Trade Card on the back. The printed 'Naish' on the card looking very similar to the signature on the one signed example of this artist's work that we have seen 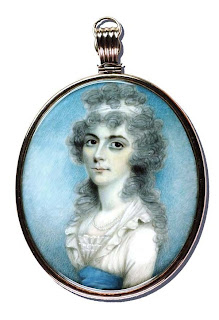 The unsigned miniature already in the collection attributed to William Naish showing his mature style.
We then compared both of
these with one known signed and another unsigned miniature  (not in our collection), both
ostensibly by William Naish, and obtained examples of engravings after
Naish.  After looking for a while, a distinct set of peculiarities
became apparent, some of which even show up in engravings.  This
caused us to completely change our mind about the possibility of the above
miniature being painted by William Thicke. It perfectly matches the
nuances picked up in all the William Naish miniatures.
This is what we noticed that the William Naish miniatures had in common: 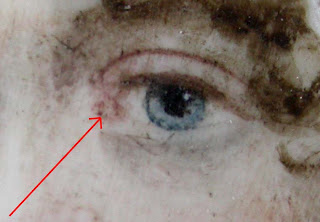 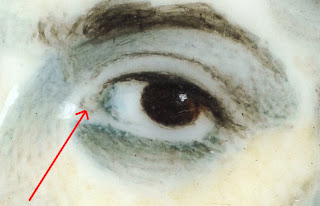 A small round bare patch of ivory in the corner of the eye, which
looks as though it has been scraped out. 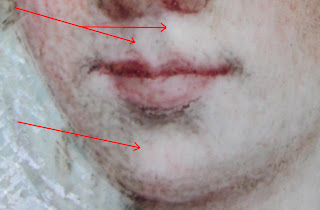 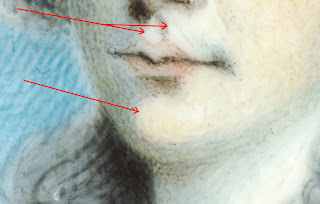 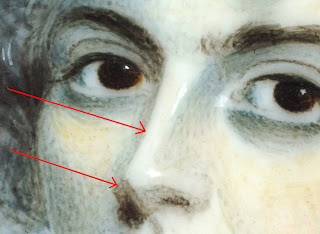 Small dark brushstrokes modelling the tip of the nose
-and an oblong shaped light down the centre of the nose
William Thicke's work shares several techniques in common with Naish.
The rather naive appearance.The heavy lines under the eyes. The curvy full mouth.
The individual strands of hair. Even the modelling at the
tip of the nose looks decidedly similar.  Anyone familiar with
Thicke's miniatures knows that they are modest little affairs, usually
with plain background, but occasionally with a curtain or something
more adventurous.  The background strokes are usually fairly evenly
sized as seen in the following example from the collection 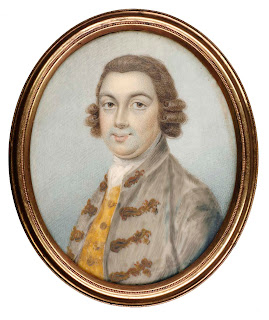 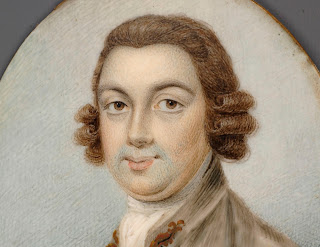 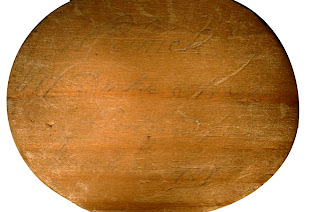 William Naish, however, uses a variety of different brushstrokes in
his background and frequently changes direction. 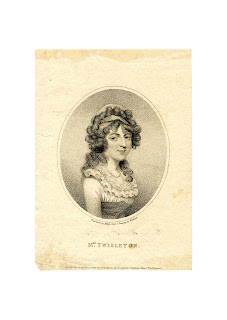 An early engraving of a William Naish miniature
Although we see him
today as a rather quirky and unimportant miniature painter with a
short career (he was only 33 when he died), in his day William Naish made quite a
name for himself and built up a substantial career painting actors and
actresses.  He was described as an 'esteemed' miniature painter and
The Gentleman's Magazine Volume 97, Part 1 1805 wrote on page 203
'Axbridge is the birthplace of two very great geniuses in the art of
painting, Mr. William and Mr. John Naish...The former (William) to the
irreparable loss of the Polite Arts, is lately deceased.'  The magazine
even published a posthumous 'Ode to Mr.William Naish, Limner' written
by a friend.
Posted by portraitminiatureclub at 8:10 AM