Last week we received an invitation from Bernd Pappe
to meet some Portrait Miniature collectors in Paris.
Bernd is well known as a writer, lecturer,
conservator and restorer of miniatures. 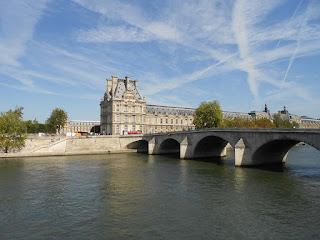 The Seine on the day of our visit.
We all met up at a small Moroccan restaurant  in Central Paris for dinner.
There were twelve of us.  Most of the collectors present were French
and primarily interested in Continental miniatures.
After dinner everyone brought out miniatures
for the group to inspect and enjoy.
We had a lot of fun and everyone was very friendly.
We brought along a few miniatures from our collection.
One was a miniature on vellum by the Swiss artist
Pierre Huaud II set in a gold enamel locket 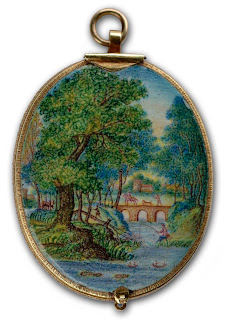 The front has a country scene with a man fishing. 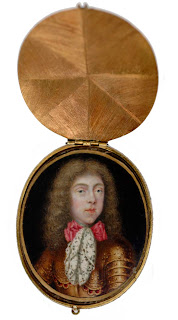 Inside is a portrait of Frederick Augustus I who was
Elector of Saxony in 1694and was also King of Poland.
This was painted c.1690 when the sitter was twenty.
He was also called Augustus the Strong.
Wikipedia suggests that he liked to live up to his name
by breaking horseshoes with his bare hands
and engage in 'fox tossing'
with a single finger!! 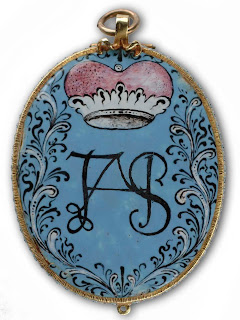 On the reverse is his initials at the time of the painting
Frederick August Herzog Zu Sachsen. 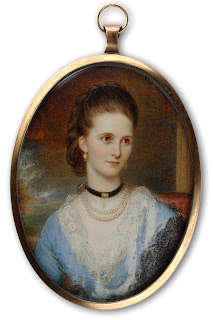 We also brought along a later miniature by Reginald Easton.
The sitter is Lucy Marion Hardy of Dunstall Hall near
Barton under Needwood just north of Birmingham
It was painted in 1875 and shows that there were still
very talented  miniaturists painting during this period.
The group meet a few times every year, and on this occasion,
several of the usual participants were unable to come.
During the evening, we received an invitation from
one of the collectors and his wife
to view their collection at their Paris home,
which was a real privilege. 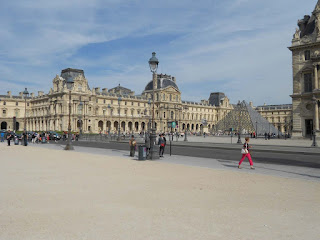 The next day we went to the Louvre. We were given a tip by
Thierry  Jaegy-Theoleyre, a collector at the dinner,
that if we went to the 'Lion Gate' we could possibly get access
to some of the wonderful miniatures in the Louvre,
which are not usually on display. 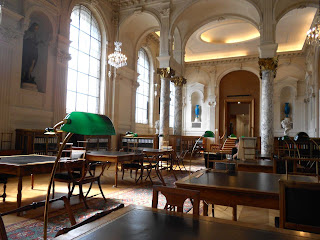 After filling in forms and working our way through
French bureaucracy we managed to gain entry
into the Print and Drawing study room. 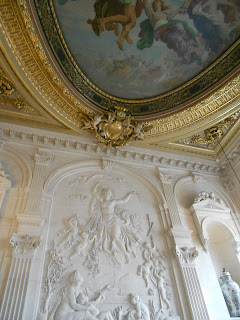 The study room is lavish and has a beautiful painting on the ceiling.
We later discovered that Bernd Pappe,
who carries out conservation work at the Louvre,
had put in a good word for us,
which helped  in our access to the miniatures. 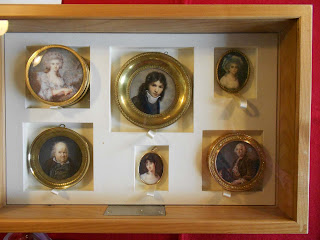 We had filled out forms with the reference numbers
of the miniatures we wanted to see
and these were brought to us in sealed boxes.
Gloves and magnifying glasses were provided. 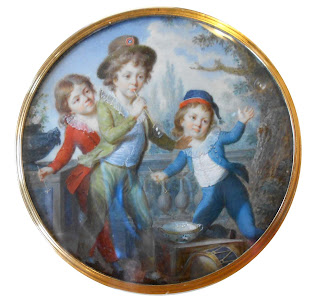 We loved certain miniatures particularly.
This one by Augustin painted in 1795
of three children blowing bubbles was charming. 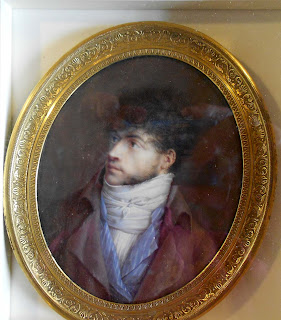 We are great fans of  Louis Francois Aubry and we were
delighted to examine a self-portrait by him. 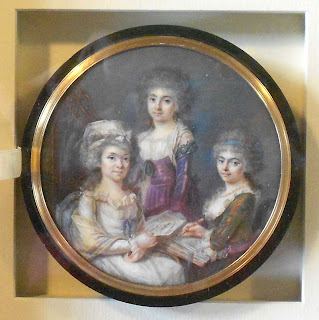 A miniature by Dumont. 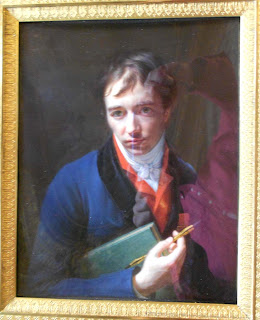 Finally ,we were able to examine a large portrait
( 8 inches by 6 inches ) on ivory by Augustin.
The sitter is Antoine Chaudet, a painter and sculptor.
Unfortunately because of the reflection from the glass
the photo does not do this painting justice.
. 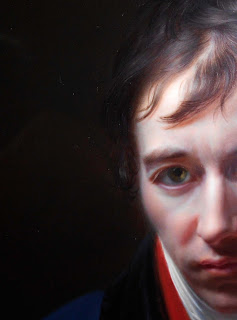 As always, we were astonished by the technique of the Master.
The light in the eyes and hair parting were extraordinary,
A true masterpiece which was the final highlight of
a wonderful few days in Paris.
Posted by portraitminiatureclub at 11:04 AM