It is likely that William Thicke was born in .  He spent all his working life at the same address; . was largely inhabited by tradesmen.  His wife was Elizabeth Trueman (c.1757 - 1832).  She shared in an inheritance from a great uncle Jonathan Trueman and put this in trust for her daughters. She died aged 75 at the family home of Duke Street, London.The couple's two daughters, Elizabeth, known as Eliza, (c.1778 - c.1865) and Charlotte, (c.1789 -1856) were both artists like their father. Sometime after 1845 the sisters moved from 17 Duke Street to 64 Arlington Street, where Charlotte, the youngest, died aged 66.
William Thicke exhibited at the between 1787-1814.  His miniatures are not highly thought of, being a little naive, and as many are unsigned, often described as English School or misattributed. 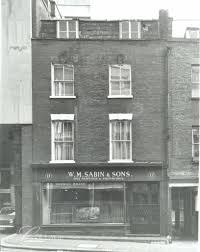 17 Duke Street London
A discovered trade card notes that Thicke worked in and , as well as from his base and this is borne out by an account of a chance meeting with the artist by the architect, William Porden (1755-1822).  William Porden kept a diary of his travels, which is now kept in the archives at Derbyshire County Council.
On Friday 21 August, 1795,  Porden records setting off from to in the stagecoach.  Amongst his travelling companions was 'Mr. Thick, a miniature painter on a professional expedition to ...'
'(Mr. Thick) was a little fat jolly facetious man, as illiterate as an artist could be desired and seemingly taking small interest in the Arts or in subjects relative to them. His mis-pronunciation w[oul]d rival Mrs Slipslops.  He abounded in jests and smutty stories which he told tolerably well, though sometimes, as it must happen, with men who are always telling stories, lost the spirit of the story and seemed not always to know where the joke lay.'
Despite the architect's poor opinion, William Thicke proved to be hardworking and astute, leaving his daughters extremely well provided for after his death.  In addition to his home, Thicke owned nos. 27 and , , which were rented out, according to the Sun Fire Office records, with whom the properties were insured. 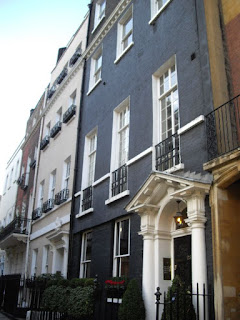 27 Charles Street London
In June 1823, Thicke made a Will, and the following year, added a Codicil.  In his Will, he left 20 guineas to Mr. Thomas Hapworth and his properties to Charlotte, his younger daughter, together with all his pictures 'of every description' and his boxes of oils and watercolours, with these passing to Eliza if her sister predeceased her. Eliza was left the family silver.  However, in his Codicil, the artist records that he has recently purchased two further properties at 3 and 4 Sydney Terrace, Chelsea which accounted for '...15 years of my profession without borrowing one guinea..'  One of these is left to Eliza and the other to . The artist died in 1830.  Neither daughter married, and in the census of 1851, when Charlotte and Eliza have moved from the family home in , they are both listed as annuitants, have a servant, and the younger sister is head of the household. 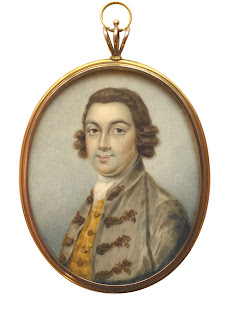 This miniature of an unknown man, listed as unsigned, was originally offered for sale by in February 2008.  It was passed in.  Later that year it was sold by Bonhams Bath office.  We purchased it in 2010 from a dealer, paying little more than he had paid at auction.  The dealer claimed that the sitter was Mr. Nathan Crowe.  However, this seems doubtful as there was no note of the sitter when we opened the miniature, but we did find the artist's signature and address and a date on a backing board, written in faded pencil, reproduced below.  At first we thought that the date was 1759, and on closer inspection we were satisfied that it was 1791. 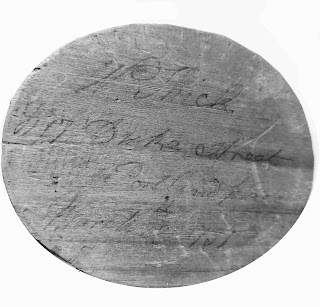 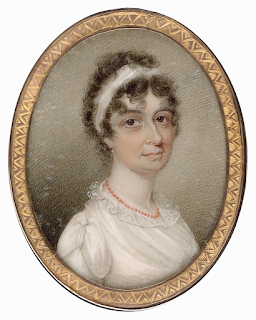 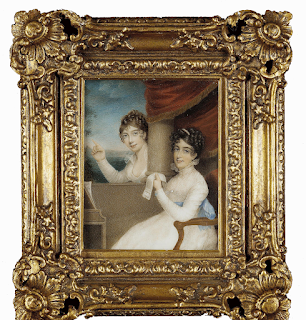 Miss Charlotte Thicke (British, fl.1802-1846)
Two young Ladies, probably sisters, both wearing white dresses; one, seated, with pearls in her hair and a blue sash at her waist, a letter in her hand; the other pointing from a behind a stone column and red curtain, a harpsichord with sheet music in the foreground, landscape background. This miniature sold by ©Bonhams in 2004 could possibly be a self-portrait with her sister Eliza.


Posted by portraitminiatureclub at 11:31 AM