An Invitation to Buckingham Palace 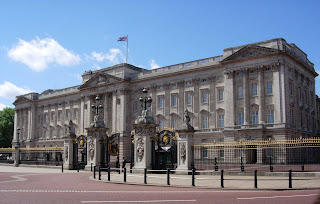 A few weeks ago, we heard that The Royal Collections had purchased a copy of our book, ‘THE ARTURI PHILLIPS COLLECTION: A Catalogue of Portrait Miniatures’. We were also invited to a reception at . The envelope duly arrived, unmistakably with a postmark
' ' although it was sent from the office at .  The Royal mail is collected from the palaces by liveried coachmen in one of the royal coaches and taken to the sorting office! This is to exercise the horses and to get them used to the busy traffic.
In a rather unexpected modern twist, we were invited to RSVP by email!!  Which we did!!  There was a ripple of excitement in the art world at the prospect of the reception, and a lot of guessing and second
guessing as to who had been invited.  The occasion was held to mark the publication of the catalogue of H.M. The Queen’s Victorian Miniatures – over 1000 of them – photographed and catalogued by the Queen’s Assistant Curator, Vanessa Remington, who had access to Queen ’s diaries and papers. 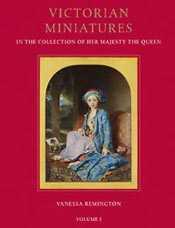 For those of you not invited, you will be pleased to hear that it was not a lavish affair. There was no dress code, but nearly all the gentlemen wore dark suits. Guests were greeted, without fuss, by smiling uniformed attendants, both men and women, from all age groups and backgrounds.  There was not a whiff of security anywhere.  And certainly no X-Ray scanners or handbag searches!  The sumptuous exhibition, Victoria & Albert: Art and Love  - recently extended to run until end December by popular demand – was a fitting backdrop  to the intimate world of the miniature artform. 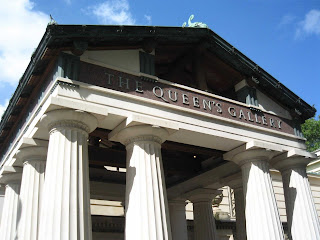 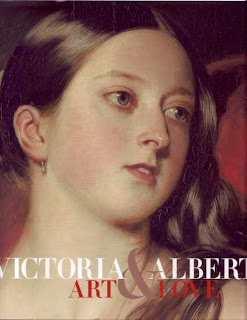 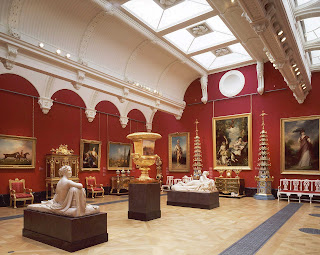 With Christmas in prospect, Roger promply put the ornate carved ivory throne encrusted with diamonds, rubies and emeralds on his ‘wish list’ , presented to Queen in 1851 by the Maharajah of Travancore. 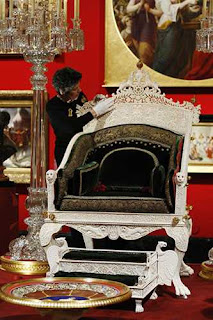 Carmela settled for Sir Edwin Landseer’s  gorgeous portrait of  , the Princess Royal, with Eos nuzzling her little foot, commissioned by Queen in 1841 to give to her husband, for his birthday. 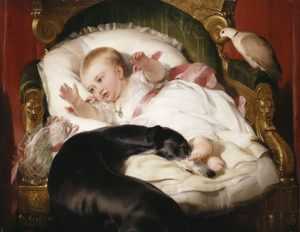 .
On arrival, we were offered a choice of a glass of  chardonnay  or lemon and lime fizz.   Miniscule little mouthfuls of food were served, without plates, cutlery or napkins, throughout the reception on little oblong glass trays, underlit and with pink and white lilies in the bottom compartment.  Mini lamb burgers in tiny bread baps  topped with goats’ cheese, quails eggs and dips, little quiches and tartlets and other dainty morsels.
Vanessa Remington came over to talk to us, dressed in an elegant black dress. She spent eight years cataloguing the Queen’s Victorian miniatures, taking time out to have three children! ‘Insiders’ had expected HRH Prince Charles to attend.  He is known to be particularly interested in miniatures and is Patron of the Royal Miniature Society.  In the event, there was no representative from the Royal Family, but this did not dampen the enjoyment and enthusiasm of participants.
Amongst the invitees, who made up a veritable Who’s Who of the Art World, were the legendary Sir Roy Strong, sporting a new look, almost unrecognisable, looking more like an older rock star than an art historian and former Director of the Victoria and Albert Museum, Alan Derbyshire, who is in charge of conservation at the V & A, Bernd Pappe, author and conservator of miniatures at the Louvre Museum.  Of course the well known miniature dealer and connoiseur, David Lavender and his wife, Patricia, had been invited, as were the experts from all the major auction houses.
We were introduced to several decendants of famous artists, including the friendly and enthusiastic Henry Engleheart , the great nephew of the 'great' man himself, George Engleheart.  During conversation we embarrassingly discovered that we had been bidding against him in  an auctions as he tried to regain his ancestor's fine work!  He and his wife generously took no offence and continued to chat to us amiably.  The evening resulted in many invitations and renewing of acquaintance.   Proceedings were discreetly brought to a close when staff circulated to collect wine glasses, murmuring ‘thank you’s’ and wishing guests ‘goodnight’.
Posted by portraitminiatureclub at 3:31 AM