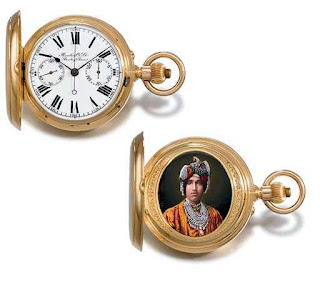 A 'Rajah' pocket watch by Marcks & Co. Ltd. c.1895
During the latter half of the nineteenth century, a number of Swiss artists painted enamel portraits to be mounted into heavy gold pocket watches for the Indian Market. The watch movements were usually complicated and with as many decorations as possible and were made by companies like Marcks & Amp. Co Ltd. with the enamel miniature of the owner mounted on one side and the watch face on the other. These pocket watches became known as 'The  Rajah Watches'.

The watch movements were mainly produced by the highly specialised watch manufacturers in the Vallée de Joux or Le Locle and delivered to the case makers in . The cases were almost exclusively done in the workshops of Ferrero, Tardy, Bonifas, Giron and Lamunière, based in . Important Indian clients often supplied the diamonds and other precious stones to be set onto their watches.


Some years ago we purchased one of these enamel portraits, signed 'JG', (without the watch!) and we had no idea what we had purchased until we were kindly supplied with the vital information by Roni and later Julian, two very kind gentlemen who put us on the right track.  The enamel portrait shown above is of HH Maharaja Rajendra Singh Bahadur of Patiala  and is signed by  John Graff.
John Graff worked from  photographs sent from he acknowledged master in his field. He became one of 's most famous enamel painters who was said to be able to catch 'an incredible likeness even from the most mediocre documents'. He was also renowned for his sense of colour and the astonishing relief of his work. John Graff's fame quickly spread throughout and the dignitaries would often request his signature on the watches and boxes they ordered. His works were signed "J. Graff" or "J.G." or "Graff".  However, he was harbouring a secret method of working, which only becomes obvious with high magnification!

Five examples of "Rajah Watches" with enamel portraits of high dignitaries signed John Graff are illustrated in Technique and History of the Swiss Watch" by Eugène Jaquet & Alfred Chapuis, plate 133. 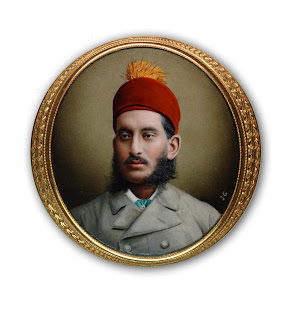 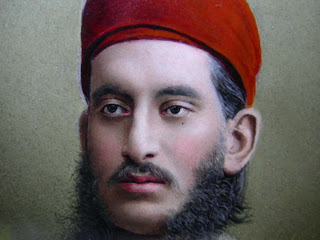 Close up detail showing John Graff's superb talent but also showing that the likeness was achieved by over-painting a photograph developed on the enamel base. Some of the 'giveaways' are the shadow under the red of the nostril, the faint shadow of the photograph on the lips and the halo around the face 'blending' the brushwork and the photograph.  Perhaps you can see some other clues if you look carefully! This developing process was invented by Paris photographer Lafond de Camarsac (1821-1905) around 1867, for which he won a Medal.

On the back is stamped '18 carat' and M & Co Ltd
Interestingly a number is scratched under the stamping
'2673' which could have been a reference for which watch this enamel was intended. Alternatively, it could be the serial number of the patent granted for the development of the photographic image. 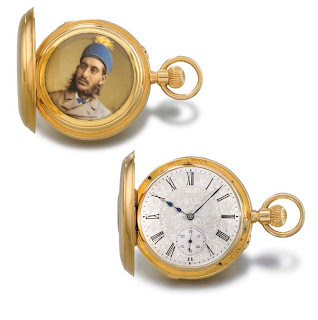 Another image of the Nizam of Hyderabad, showing the portrait in the watch. 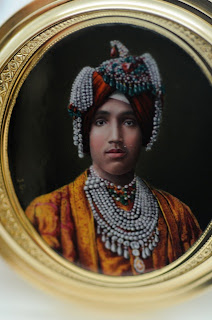 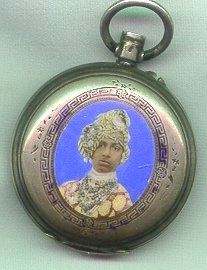 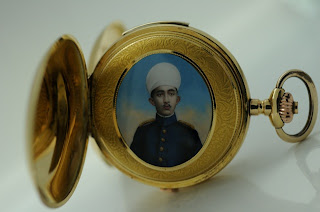 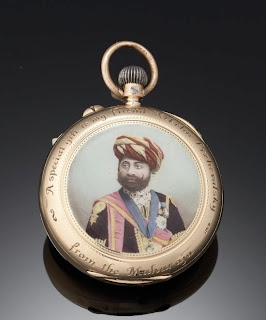 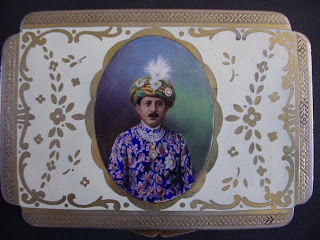 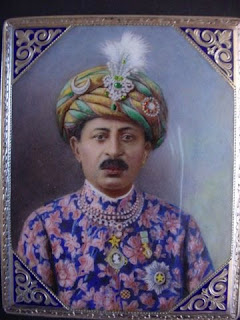 Our grateful thanks to Roni Madhvani for sending us these additional images and allowing us to use them.

Posted by portraitminiatureclub at 2:15 PM