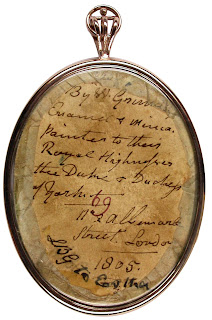 In 1764, when William was 13, he was apprenticed for seven years to his uncle, Thomas Worlidge, a successful artist, to study drawing and painting. Worlidge had himself received instruction from William’s grandfather, Alessandro, who was also an artist, and had married Alessandro’s daughter, Arabella, as his first wife.  About two years after William had left home to live with his uncle at Great Queen Street, Lincoln’s Inn Fields, Worlidge died in 1766 leaving the young Grimaldi to reside with his aunt, Worlidge’s widow and his third wife, for the remainder of his apprenticeship. William Grimaldi continued to study portrait painting and to master watercolour, portrait miniatures, enamelling and oil painting.  The Worlidge family again became connected to the Grimaldis when Thomas Worlidge Junior, the only surviving son of Worlidge Senior’s third marriage, married William Grimaldi’s sister, Phoebe c. 1785. 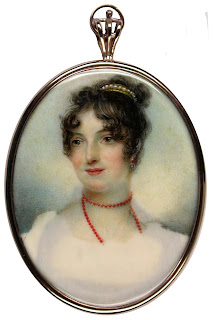 In 1777, William accompanied his father to Paris and remained for the following six years.  He gained many commissions from the city’s High Society, having been given introductions to the King’s Almoner through his friendship with Abbe Clovet.  Reputedly, his polished manners, amiable disposition and cheerfulness won him many clients.  He also received offers to advance his position on condition that he embrace the Roman Catholic religion, which he declined.  William’s father, Alexander, had already relinquished his Catholicism.

On 13th November 1783, Grimaldi married Miss Frances Barker in England and returned to Paris with his bride, where they set up home until the following year.  On returning to England William and his wife had four children, the youngest, Henry, died aged 15. 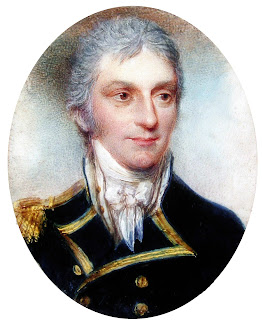 Although Grimaldi  exhibited at the Royal Academy in 1786 and continued to do so until 1824, he did not enrol as a student at the Academy Schools. He gained many introductions through his friendship with the first President of the Academy, Joshua Reynolds, and quickly established himself in Royal circles, with the appointment of Miniature Painter to the Duke of York in 1790 and the Duchess of York in 1791, followed by the appointment of Enamel Painter Extraordinary to the Prince of Wales (later George IV) in 1804.  There are still twelve miniatures by Grimaldi in the Royal Collection today, most of them commissioned by George, Prince of Wales.


William Grimaldi’s first exhibits at the Royal Academy were signed ‘De Grimaldi’ or Di Grimaldi’.  By 1790 he had dropped the prefix and his signature was often found on the front lower edge just as ‘Grimaldi’.  A further variation was the use of the title ‘AR’ (Academie Royale, the French Royal Academy) after his name, W. Grimaldi AR, although he was never elected as such. 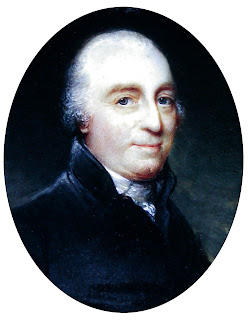 In 1800 William’s father, Alexander,7th Marquess of Grimaldi, died and William became the 8th Marquess.  He continued his work as an artist throughout his life, painting miniatures on ivory and on enamel, watercolour portraits, pencil and ink drawings. His grandson, Alexander Beaufort Grimaldi, compiled a catalogue of William Grimaldi’s work in 1873 (A Catalogue, chronological and descriptive of Paintings, Drawings & Engravings by and after William Grimaldi) which detailed over 440 miniatures on ivory, 38 enamel miniatures and many watercolour and pencil drawings.  However, posthumous catalogues are not always completely accurate and it is thought that the total number of miniatures on ivory that he painted during his long career was around 1000. 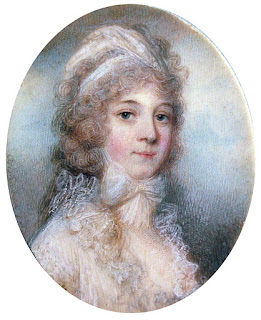 In his later years, Grimaldi’s temperament was said to have become more variable. Apparently, he was prone to be highly sentimental in his relationships with periods of excitable behaviour and episodes of melancholy and depression.  At times he was very lavish with his expenditure.  After his wife, Frances, died in 1813 aged 63, he kept working but never remarried.  According to family stories, he did, however, form an attachment to Elizabeth Dawe, a very pretty girl who was described as his niece and who lived with him after he became a widower.  She was reputed to be a talented musician  and was able to clear away his depression with her music.  He in turn taught her miniature painting. 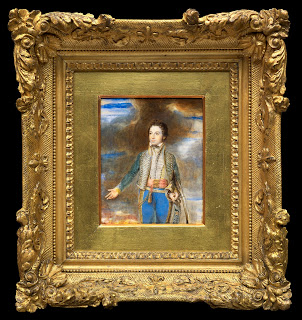 William Grimaldi died on 27th May 1830 aged 78 and was buried in Bunhill Fields Cemetery on 3rd June.  The cemetery is at 38 City Road and although technically in Islington, is owned and managed by the City of London.  His son, Stacey, inherited the title and became 9th Marquess Grimaldi. 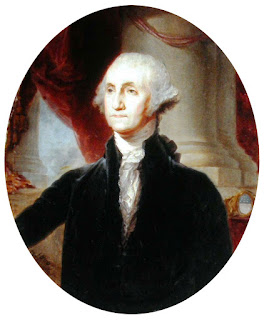 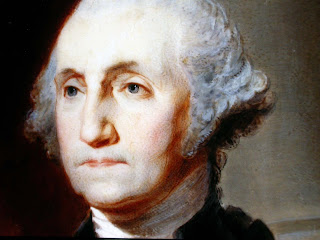 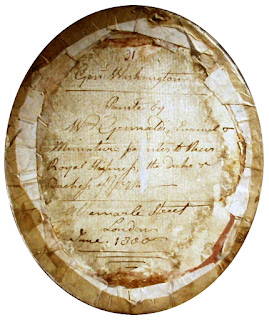 William Grimaldi worked from the following London addresses, according to entries in the Royal Academy collated by Algernon Graves:

We are grateful to Antony Paul Colton Halls, a descendant of the Grimaldi family and an artist himself, for sharing previously unknown details about William Grimaldi, after three decades of interest and research.  Antony has his own personal fascinating story to tell (please see below) about an acquired enamel miniature and his belief that the wrong branch of the family sit on the Grimaldi throne.
Posted by portraitminiatureclub at 2:36 AM